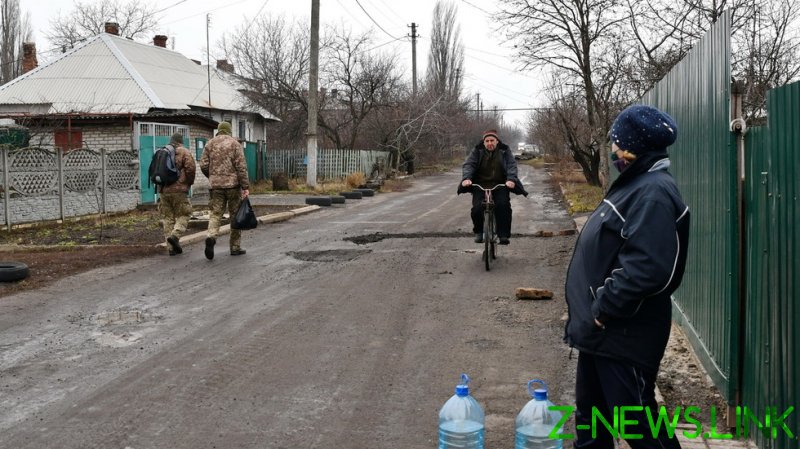 The leadership of the self-proclaimed Donetsk and Lugansk People’s Republics on Friday asked civilians to evacuate to Russia to avoid being in the crossfire.

Donetsk People’s Republic head Denis Pushilin said in a statement that he expects military aggression by Ukrainian forces. The country’s troops have been bolstered with arms supplies from Western nations and “are now prepositioned for combat and ready to take Donbass by force,” Pushilin claimed in a statement, referring to his region and fellow breakaway entity, the Lugansk People’s Republic, by their collective name.

Ukrainian troops have been bolstered with arms supplies from Western nations and “are now prepositioned for combat and ready to take Donbass by force,” Pushilin claimed in a statement, referring to his region and fellow breakaway entity, the Lugansk People’s Republic, by their collective name.

The Ukrainian rebels are expecting President Volodymyr Zelensky to order an offensive “in the nearest future.” Their military forces are prepared to fight, but civilians in rebel-controlled areas are at risk of being caught in the crossfire, the head of the Donetsk People’s Republic warned.

“That is why starting today, February 18, a mass evacuation of people to the Russian Federation has been organized,” he said, adding that vulnerable groups like women, children, and the elderly would be given priority.

The head of the Lugansk People’s Republic (LNR), Leonid Pasechnik, also called on people to evacuate from the region.

Pushilin said Russian officials in the neighboring Rostov Region are expecting an inflow of evacuees and will provide them with what they need. There will be conditions at border crossings to expedite the process, he added. He urged people “to heed to the warning and take the right decision,” saying that the relocation would be temporary and would save lives.

The statement was released after OSCE observers deployed to eastern Ukraine to monitor the situation along the line dividing government-controlled parts of the country and territories held by the rebel forces reported a surge in hostilities this week.

Western nations have been claiming for months that Russia was preparing a military invasion of Ukraine. US officials stated that Moscow was preparing a “false flag” operation to justify an attack.

Moscow rejected the accusations. The only way hostilities could break out, Russian officials said, is if Ukraine attempts once again to use military force to take over its breakaway regions. Moscow accuses Kiev of failing to abide by a follow-up roadmap for the reintegration of the Donetsk and Lugansk regions – the Minsk agreements – which Ukraine and the leaders of the two self-proclaimed republics signed in 2014 and 2015, after significant hostilities broke out in the region.