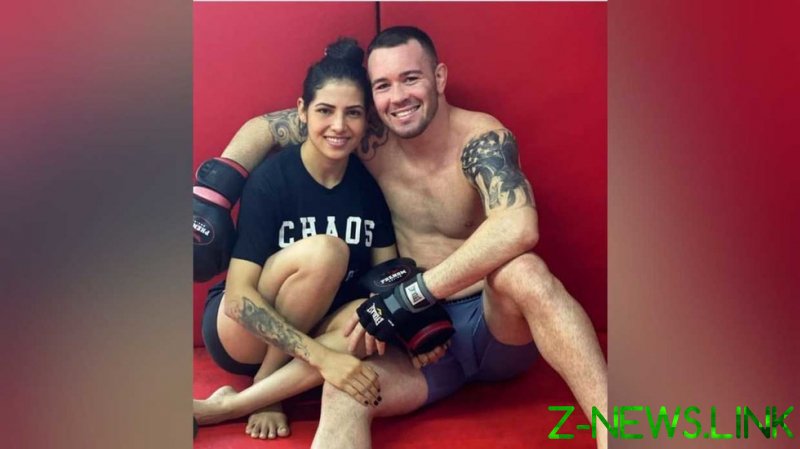 Former welterweight interim champ Covington posted an image to Instagram of himself with Viana with his arm draped across her shoulder and the smiling pair touching each other’s knees. Viana is also wearing a T-shirt with Covington’s ‘Chaos’ fighting moniker written across the front.

Others, however, were angered by the image and accused Viana of associating with a man who once branded fans in her homeland “filthy animals.”

After defeating local favorite Demian Maia in Sao Paulo in October of 2017, Covington grabbed the mic to launch into a diatribe against the furious crowd, screaming: “Brazil, you’re a dump. All you filthy animals suck.”

Covington escaped the cauldron of hatred as fans hurled objects at him, and later claimed that the incendiary remarks had been part a move to attract more attention as he was supposedly on the brink of being cut by the UFC.

Some Brazilian fans clearly haven’t forgiven or forgotten, taking to the replies section to call out Viana.

Viana can clearly handle herself, rising to global fame after she fought off a would-be mugger in her homeland back in January of 2019.

On that occasion, UFC boss Dana White shared the damage dealt out by the 28-year-old Viana to the offender, adding the caption “#Badf***ingidea.”

Viana boasts a 12-4 professional MMA record and was successful in her last trip to the UFC octagon, submitting Mallory Martin inside the first round of their contest at UFC 258 in February.

Ever since his run-in with fans in Brazil, Covington has continued to cultivate his image as one of the UFC’s biggest trash talkers.

The 33-year-old star enjoyed close relations with former US President Donald Trump and his family, championing the MAGA cause and visiting Trump at the White House.

That support extended to Covington taking aim at Trump’s critics as well as the Black Lives Matter movement. His last contest with Tyron Woodley – which ended in a fifth-round TKO victory for Covington – was mired in fractious rhetoric such as Covington calling his opponent “a woke little b*tch.”

In recent weeks, Covington has reignited his feud with arch Trump opponent LeBron James, calling him a “Chinese finger puppet.”

Covington has previously labeled James a “spineless coward” and has vowed to make him “eat the canvas” in the extremely unlikely event of a showdown between the pair.

Covington is currently waiting on his next UFC assignment, although a contest with teammate-turned-foe Jorge Masvidal has been widely touted as a possibility.