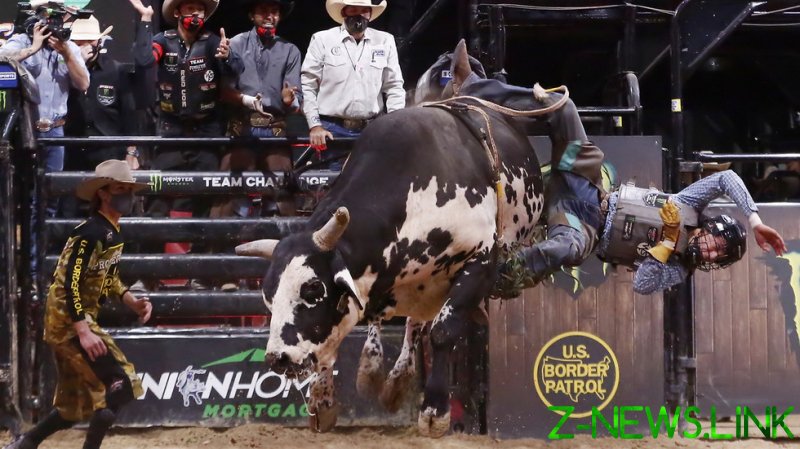 Campos Silva was unseated from his bull during the ‘Classic Man’ event after just over 5 seconds – some three seconds short of the minimum required time to register a score – and suffered severe injuries to his chest when he was subsequently stomped on by his ride.

The Brazilian was transported to the Community Regional Medical Center where he was pronounced dead, per a spokesman from the Professional Bull Riders’ (PBR) circuit.

“When he came off, his spur got tangled up and it turned him upside down right under the bull’s back leg,” said Cody Lambert, livestock manager for the PBR.

Andrew Giangola of the PBR also indicated that the incident was a tragic accident and that the bull didn’t do anything unusual in its bucking motion which caused Campos Silva to come off his ride.

“This was not an act of aggression,” Giangola explained.

“The bull was bucking in his normal pattern. Amadeu’s spur got hung up in the flank rope, and he was pulled under the bull in a freak accident.“

Campos Silva was a promising bull rider, having joined the PBR US Tour after taking part in similar events in Brazil in 2017 and 2018.

At the end of last year, he took part in the 2020 PBR World Finals – and the competition in which he was competing during his tragic fall, the Velocity Tour, is considered to be the one of the sport’s top events, behind the famous Unleash the Beast series.

“Amadeu battled hard and was a rising star in our sport,’’ the PBR added in a statement. “Our heart breaks for his family and friends.

“The entire PBR and western sports family extend our thoughts, prayers, and heartfelt condolences to Amadeu’s family and friends.”

Campos Silva becomes the 21st bull rider to have been killed in competition since 1989 and follows Mason Lowe who passed away in similar circumstances in early 2019.

However, in all likelihood the toll of riders who have passed away while competing is likely far higher in the sport as amateur bull riders are not included in these statistics.