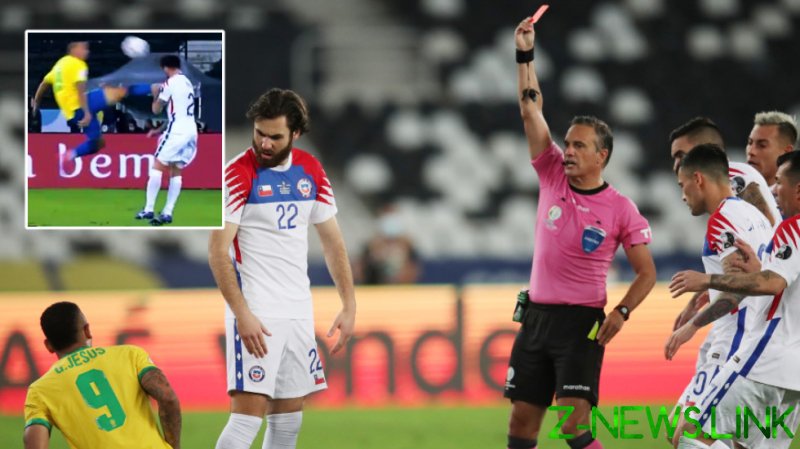 The deserved dismissal, which came three minutes after the break at Rio’s Estadio Nilton Santos, was so bad that many fans could only mock it. “How’s that a red card?” asked one joker, watching Mena poleaxed on the turf. “Clearly got the ball.”

Bafflingly, PSG superstar Neymar seemed to claim that his strike partner had suffered a misfortune. “Jesus was just bad luck,” said the playboy, who is familiar with disciplinary controversies in his own temperamental game.

“He had his eye on the ball, not on the man, and unfortunately he was sent off.

“We managed to withstand something that rarely happens to this team. It was a big test for us.”

Chile were able to apply more pressure after the rash 24-year-old’s departure, hitting the crossbar as Brazil sneaked through to a semifinal clash with Peru.

“Every day that goes by, we have tests to make us stronger, to prove that we can play under all kinds of circumstances,” said Neymar.

“Chile are a good team; they have great players and it is very difficult with a man less. Everyone deserves praise – the defence, the midfield, the forwards.”

Brazil coach Tite was proud of his players and claimed they had been ready to go a man down.

“One of our goals is to anticipate game situations,” he explained. “We anticipate being one less. Not that we want that, but sometimes [it can happen] due to an… expulsion.”

Chelsea defender Thiago Silva described the match as “atypical”. “It’s difficult for you to play with a player less for almost 45 minutes,” he admitted.

“We have to congratulate everyone for their dedication, for their effort. Especially the wide attackers, who ran a lot and were able to help us defensively. It was a very difficult game.

“It’s a source of great pride because it’s a competition in which, sometimes, situations occur in which you have to adapt. We were happy in terms of keeping the result and qualifying.”

Peru booked their spot in the final four with a 4-3 victory over Paraguay on penalties following a 3-3 draw.