Home / WORLD / Brazil and Argentina point the finger at each another, but there’s plenty of blame to go around after their global embarrassment

Brazil and Argentina point the finger at each another, but there’s plenty of blame to go around after their global embarrassment 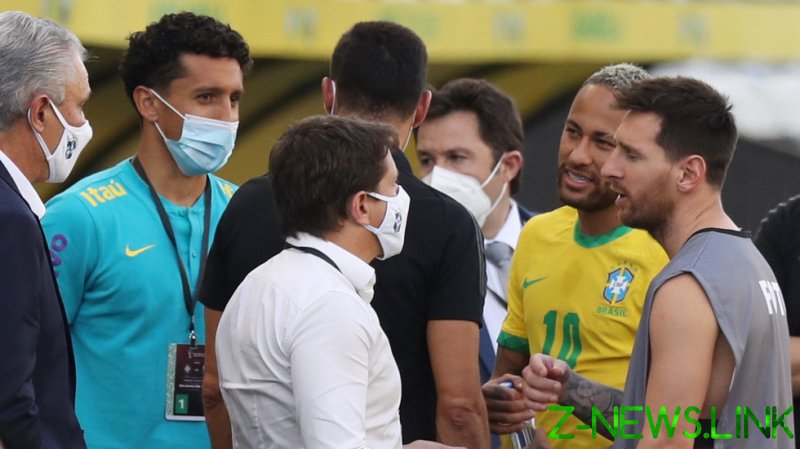 Europe may snatch its best talent for their clubs, who take advantage of the poor finances and organization of its counterparts across the Atlantic, and the desire youngsters in the favelas and barrios have to play in the Champions League while establishing financial security for generations to come through astronomical salaries that provide a route out of poverty.

But it will never be able to offer anything that comes close to matching the history, passion and quality as a Brazil vs Argentina football encounter can.

First, let’s give credit where it’s due.

With a fan-friendly 8pm UK or 9pm mainland Europe kick-off this time round, South American football’s governing body Conmebol at least learned its lesson from the clanger it dropped by scheduling a dream Copa America final at the Maracana between these two sides in mid-July in the early hours of the morning, when most were focused on getting a good night’s rest before Italy and England did battle the next day in the Old Continent’s Euros equivalent at Wembley.

In a farce for the ages under three months later, however, this time at the Corinthians Arena, that is where the praise starts and finishes.

If you haven’t heard by now, it went something like this.

In Sunday primetime with the planet watching in anticipation, a Brazil vs Argentina World Cup qualifier was suspended after just five minutes when agents from health authority Anvisa and Federal Police officers stormed the pitch to arrest or at least deport three of four Argentina players who are accused of falsifying documents to enter South America’s largest country.

As part of its typical reciprocity which extends to visas, Brazil currently treats foreign naturals arriving from the UK how its countrymen and women are treated when landing in the British Isles.

In fear of the Covid Delta variant spreading, a 14-day quarantine is currently demanded when stepping foot on Brazilian soil, which meant that Emiliano Buendia, Emiliano Martinez, Giovani Lo Celso and Cristian Romero – who play for Aston Villa and Tottenham Hotspur in the Premier League – should have probably never bothered traveling to Sao Paulo after La Albiceleste’s 3-1 away win in Venezuela late on Thursday evening.

Here’s where the finger-pointing begins.

Yet quite frankly, there are several parties who have to face facts and shoulder their share of the blame.

Firstly, the quartet allegedly committed a grave mistake by trying to hoodwink officials by lying that they had spent time in the UK in the last fortnight and, along with the Argentine Football Association (AFA), showed a blatant disregard and lack of respect for Brazilian laws with their alleged attempt to bypass protocol in one of the nations worst hit by Covid.

But surely, whenever one lands in Arrivals and presents their passport before its number is typed into the system, a history of where that person has traveled for the last who-knows-how-long is then thrown up as a matter of national and international security?

Furthermore, if they had wished to prevent such potential “malandragem” – a Brazilian concept of gaining an advantage through trickery that president Jair Bolsonaro’s son Flavio accused the Argentines of employing – could they not have consulted the squad list released by the AFA on August 23, which clearly states which clubs each man plays for?

As part of standard procedure, surely the Brazilian FA – the CBF – would have received some such document they could have forwarded to Anvisa and Immigration?

They too are not innocent in this either, and stand accused of being persuaded by Conmebol, in cahoots with the AFA, not to oppose the presence of three out of the four offenders in Lionel Scaloni’s starting XI despite missing nine players themselves.

And while their shock and surprise at Anvisa’s actions communicated through a statement are hard to buy, it is difficult not to agree with what Lionel Messi was implying.

“We have been here for three days, nobody told us anything,” he claimed, highlighting the ridiculousness in Anvisa and the Federal Police’s decision to storm the pitch and not try and deport the players, who returned to Buenos Aires with the rest of the squad later, much sooner.

Live on the phone with national broadcaster Globo,  Anvisa chief Antonio Barra Torres insisted: “We called the Federal Police, who went to the hotel and we found out that they had already left for the stadium. The rest is what you’re watching live.”

The rest was nothing short of a circus and a farce.

Once more, with a chance to show the best of what it has to offer – Messi vs Neymar, the five-times World Cup winners vs the current Copa America champions – South America, thanks to the incompetence of its governing body Conmebol and dishonesty of the AFA and CBF, fluffed its lines catastrophically.

“A global embarrassment,” Globo branded it, while another Brazilian pundit dubbed the debacle “varzea” in a nod to the amateur Saturday and Sunday league game which Gabriel Jesus rose out of played by neighborhood teams in towns and cities around the country.

This was another 2018 Copa Libertadores final. Remember that?

When South America’s answer to the Champions League threw up another dream showpiece for Conmebol in pitting Boca Juniors and River Plate against one another in the last dance.

Granted the first leg was allowed to pass without incident in a thrilling 2-2 draw at the former’s Bombonera stadium.

Yet when Boca’s team bus was attacked before the return sitting at El Monumental, the trophy’s owner had to be revealed some 10,000 kilometers away at the Santiago Bernabeu in Madrid.

Again, that’s the Copa Libertadores – named after those that freed the continent – decided in the capital of its biggest colonizer Spain, which killed its indigenous, stole its gold and snatched control of nine out of its total 13 countries.

Thankfully this one came without the violence, but it is still automatically among South American football’s darkest chapters which will be remembered forever in the history books while further signaling the long-glaring need for changes at the top.