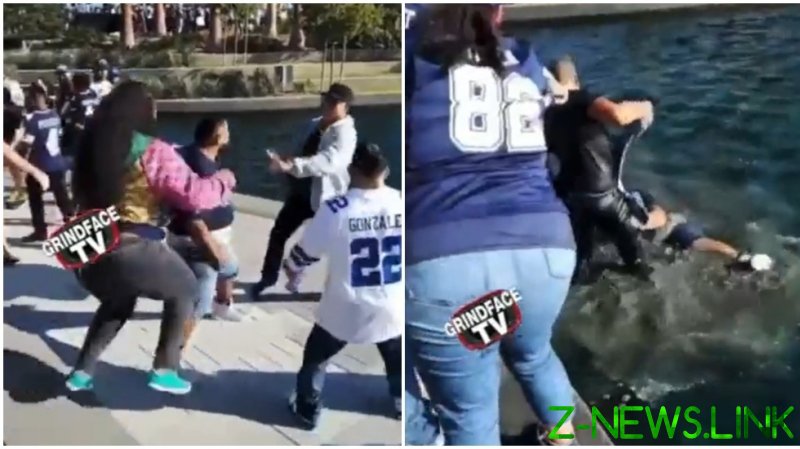 The visiting Cowboys beat the hosts 20-17 with a last gasp field goal on Sunday after seeing a series of calls such as disallowed touchdowns go in their favor.

Yet for the duration of the game, it felt more like a home fixture at Cowboys Stadium in Arlington for the Texans, who are well-supported in Los Angeles.

Remembering too that the Chargers only relocated from San Diego in 2017, their fans were drowned out in numbers not just when it came to booing from the terraces, but also in fights that broke out in the locale.

What has been described as a “WWE-style brawl” got rough outside the ground, with one of its participants tossed into the nearest lake with his backside showing as some of those present cheered.

Another Cowboys supporter followed him into the water, and then rained down punches as the soaked victim was trying to get back on his feet.

Furthermore, there were also other fights that took place in the tailgate area where fans typically drink and barbecue in the car park before going in to watch the action.

In one two-minute video, a man holds back a female accomplice for a good while as she argues with a rival, then runs over to start a brawl himself before being jumped by several Cowboys enthusiasts.

The Chargers didn’t end up taking losses all afternoon both on and off the field, though.

In the SoFi’s bathrooms, a mouthy Cowboys fan “wanted all the smoke and got left sleeping in p*ss”.