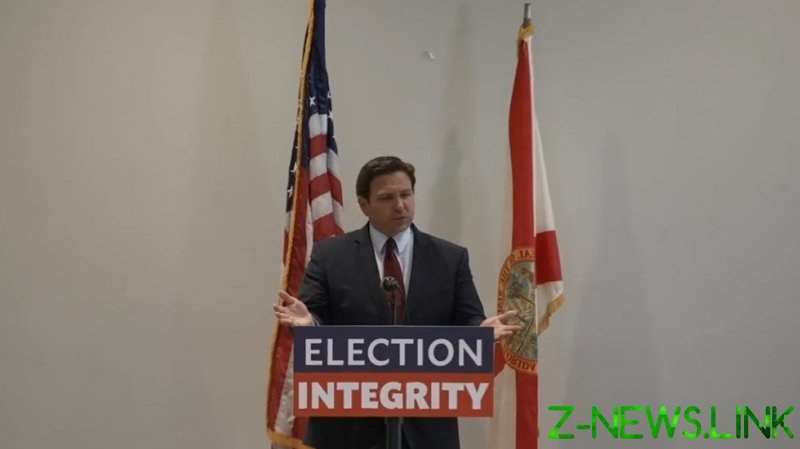 DeSantis was in West Palm Beach on Wednesday to speak about his proposed measures to tighten election security, including a ban on ballot harvesting and mandatory clean-up of voter rolls. At one point, he brought up the “Brandon administration,” causing the audience to chant “Let’s go Brandon!”

The governor seemed to relish the opportunity to blast not only Biden but also the corporate media, suggesting that their apparent attempt to cover for the president is what led to the chant in the first place. The chant took off after a NBC reporter told her viewers that the spectators at a NASCAR race on October 2 were cheering for the victorious driver Brandon Brown, rather than chanting “F**k Joe Biden.” Critics argued that the presenter only pretended to mishear the chant in a failed bid to protect the president.

Since then, “Let’s go Brandon” has gone viral, both as a family-friendly version of the original chant and as a way to mock the media. The chant has riled up Democrats, while a CNN analyst went as far as to draw parallels between the phrase and a call to support terrorists, demanding a Southwest Airlines pilot who allegedly used it be fired. A NBC reporter drew widespread mockery after he alerted the Secret Service of the chant when a gunmaker used it to advertise rifle parts.

Though Biden claimed he had a sweeping mandate to implement his agenda, having won the most votes ever in US history in 2020, his approval rating has since dropped to just over 42% in the most recent mainstream polls, collapsing from 56% when he took office. Moreover, 71% of Americans now believe the country is on the wrong track.