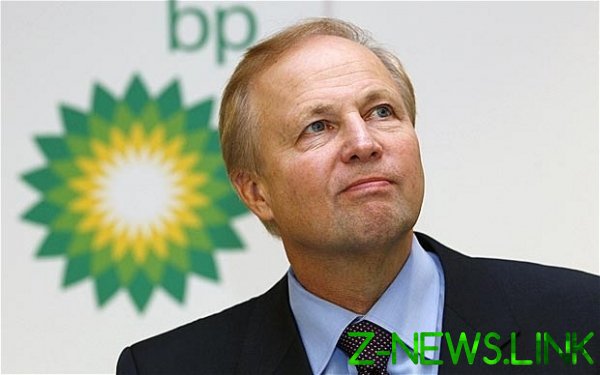 The head of British Petroleum Robert Dudley did not believe that ever in the future, oil prices again reach $ 100 per barrel. This opinion he expressed on the sidelines of the world economic forum in Davos.

“The use of oil and coal will eventually decrease. Of course, oil is still many decades will be used in the petrochemical industry. But in power generation will be gradual replacement of oil by gas and other sources of energy,” he said in an interview with the Agency TASS.

Dudley believes that “the reduction in global oil demand will occur in this century”. In some countries, the drop in demand may be significant in the case of restrictions on the use of internal combustion engines.

The high volatility of oil prices is also unlikely because of the emergence of a third player in the oil market – the United States. The possibility of rapid increase of production by American companies virtually eliminates the probability of occurrence of shortage of oil anywhere in the world, as companies from the United States “can easily fill it,” said Dudley.

See also:  The Ukrainians discussing the sky-high prices for food in Crimea

USA has created a price damper on oil market, causing prices now do not fluctuate as much as in former times, says the head of BP. And because of the increased international attention to the issue of the impacts of oil projects on the environment will increase the pressure on the business of mining companies.

Restrictions on oil production will not help the environment, said the head of BP

ESG ratings (independent ratings that assess the activities of industrial companies on three factors: environment, social and governance – approx. TASS) today made it difficult to attract funding for such projects, although, according to Dudley, this approach is “too simplistic”. “Yes, some European and American companies are suffering from this phenomenon”, – he said.

Bans on oil projects, about which much was said in Davos, does not solve the problem of reducing harmful emissions, said the head of BP. The Earth’s population in the next 20 years, according to UN forecasts, will increase by another 2 billion people, equivalent to adding another China and the United States on the planet. And the world will need energy.

Renewable energy sources (RES) currently provide only 3-4% of all needs. These challenges will change the face of the industry in the next 10 years and will transform today’s oil into a diversified energy company. They will be a lot to invest in technologies and projects that aren’t cost effective, as oil and gas projects, but minimize the impact on the environment, I am sure Dudley.