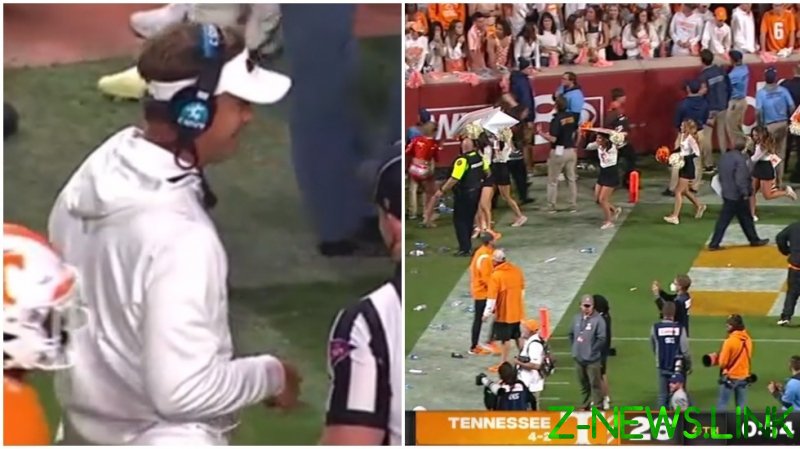 Kiffin left Tennessee in 2009 to coach USC, and took a $4.5 million role at the University of Mississippi last year.

Towards the end of the eventual 31-26 win for his team, a controversial call was made with 54 seconds remaining.

When it was ruled that Tennessee’s tight end Jacob Warren had been stopped just short of first down on a last gasp fourth and 24 yard play effectively handing the visitors the victory, the action was then delayed for roughly 20 minutes.

Officials upholding the play irritated fans that had already been booing Ole Miss players throughout, and caused them to shower the sideline area inhabited by Kiffin and others, including several Ole Miss cheerleaders, who were hit with a range of items.

“It’s an emotional game and fans are emotional, but you never expect something like that, to see all that stuff come flying out of the stands,” Kiffin explained to ESPN.

“I got hit with a golf ball, but at least whoever threw it was smart enough to throw a dirty range ball.”

Joking that he will keep the item as a souvenir, Kiffin also told of other objects he was nearly hit with.

“There were a number of bottles with some brown stuff in them,” Kiffin said.

“I’m not sure what it was. It probably wasn’t moonshine. They probably wouldn’t waste moonshine on me.”

Security eventually managed to evacuate the Ole Miss sideline area and pushed Kiffin and his assistants and players to midfield while officials huddled there too until order was restored.

When the game resumed, Ole Miss launched a three and out before Tennessee got as far as their foes’ eight-yard line to no avail as Kiffin had the last laugh with the win.

“I just wanted to make sure our coaches and everybody on our sideline who didn’t have helmets were safe,” Kiffin said, when clearing up that he hadn’t asked for the game to be stopped altogether in order to already bag victory.

“The players have helmets. My thing was, ‘Let’s finish this and get out of here.'”

Kiffin’s 82-year-old father Monte Kiffin had to be escorted away from the field too in addition to Kiffin’s sister Heidi.

Once the game was finally allowed to come to an end, Kiffin was attacked with more items such as a big box of popcorn while entering the locker room tunnel and quipped that he “got a few No. 1 signs, too, but they were the No. 1 signs with the middle finger“.

“I guess this is the story of my life. Nothing is ever normal,” he finished.

On the other side of the ball, Tennessee coach Josh Heupel expressed disappointment with the fact that the game’s temporary stoppage “will be the story from this football game from a small amount of our fans because there were so many that represented intensity in a great way tonight”.

The Southeastern Conference and the University of Tennessee were united in condemning the behavior too, with the latter’s chancellor Donde Plowman tweeting how she was “astonished and sickened by the behavior” of some fans “at the end of tonight’s game”.

Plowman revealed she would call her Ole Miss counterpart Glenn Boyce to apologize while also insisting that “Neyland Stadium has always been a place for families, and we will keep it that way”.

In his own statement, SEC commissioner Greg Sankey said that the “actions of fans at Saturday night’s game were unacceptable under any circumstances.

“We are accustomed to intense competition every week, but under no circumstance is it acceptable to endanger the contest participants and disrupt a game,” he added, with a review into conference policy due to make “certain this situation is not repeated”.