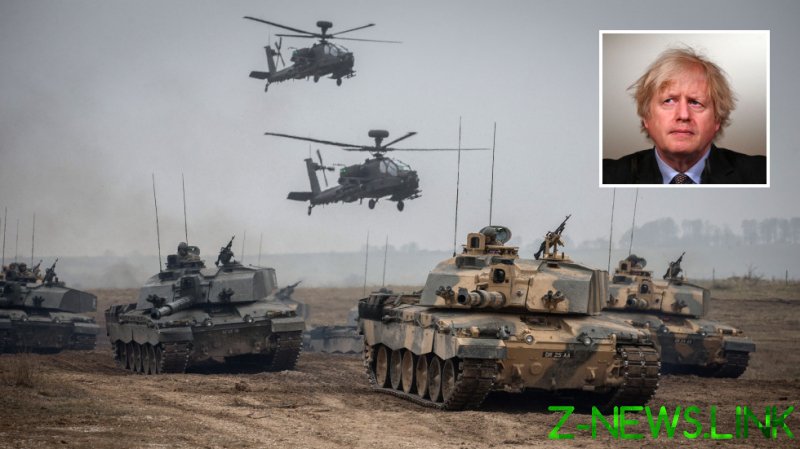 It was a revealing insight into the thinking of British conservatives. No matter what the situation, more money on the military is always the right answer.

It’s therefore no surprise that the British government’s new Integrated Review of Security, Defence, Development and Foreign Policy proclaims the UK’s commitment to increasing its military expenditure. Nor is it a surprise that the main justification for this policy is the supposed threat posed by Russia.

Given that the rising military power in the world is China, one might imagine that it would be a rather more suitable bogeyman. But the Integrated Review looks to a positive relationship with the Chinese: “We will continue to pursue a positive trade and investment relationship with China,” it says.

China, you see, is rich. Far wealthier than Britain. The UK doesn’t want to annoy it. By contrast, Russia is economically relatively weak, although its per capita GDP is still significantly ahead of the Chinese. It’s therefore a far more suitable enemy – powerful enough to scare people, but not so powerful that bad relations with it will cause some serious damage.

And so it is that the Integrated Review says that “Russia remains the most acute threat to our security.” The UK, it adds, will work with “allies to deter nuclear, conventional and hybrid threats to our security, particularly from Russia.” To do this, the UK will invest heavily in modernising and strengthening its military power.

At this point, the review suffers from a severe intellectual failing – the actual nature of the danger is never fully explained. What are the “nuclear, conventional and hybrid threats to our security, particularly from Russia”? We are not told.

In fact, when mentioning Russia, the best the review can come up with is some references to the alleged poisoning of former Russian spy Sergei Skripal in Salisbury in 2018. But an apparent poisoning is hardly a justification for billions of pounds of military expenditure. The review adds: “State threats are persistent and take many forms, including espionage, political interference, sabotage, assassinations and poisonings, disinformation, propaganda, cyber operations and intellectual property threat.” Again, there’s no obvious reason why any of this justifies a military response. How do tanks and aircraft help against “espionage, political interference,” and all the rest of it? The review fails to enlighten.

Instead, readers are subjected to some very strange plans for military expenditure. “A new generation of warships will support our historic role in keeping the North Atlantic open,” says the review. Sounds good, until you ask who precisely is trying to close the North Atlantic. German U-boats? It might as well be.

The review also announces that the UK will increase the number of its nuclear warheads. The only explanation is “the evolving security environment, including the developing range of technological and doctrinal threats.” What are these? Who knows?

The British government declares that it will hold Russia to account for its alleged breaches of “international rules and norms,” support “Ukraine, where we will continue to build the capacity of its armed forces,” and “will fund initiatives to understand and expose the disinformation threat and to support [what it calls] independent media, especially in Russia’s near abroad.” The UK, it would seem, is committed to an information war against the Russian Federation.

Occasionally, in between the bureaucratic bafflegab of cliches masquerading as deep strategic thinking, the review says something sensible. For instance, it says that “external powers will likely remain involved in national and regional conflicts, influencing their course in pursuit of their own advantage. This will increase risks of conflicts escalating.” Indeed. This would be a good point for some reflection – for the UK to consider how its own intervention in foreign conflicts has persistently made them worse.

But no. It’s as if the past 20 years had never happened. Foreign powers’ interventions are making conflicts worse. So what’s the solution? Intervene more! Britain, according to the review, must use its “armed forces to disrupt and deter through persistent engagement overseas.” What does that mean? The review provides the answer: “The UK will deploy more of our armed forces overseas more often and for longer periods of time.”

Well, that’s worked so well for the UK recently. Why not do it some more? It’s bound to turn out better next time, right?

The Integrated Review goes beyond mere military matters. In the past, it says, the UK has “focused on preserving the post-Cold War ‘rules-based international system’.”

“Today, however,” it adds, “a defence of the status quo is no longer sufficient for the decade ahead.” Instead, the UK will seek to “shape the international order of the future.”

What exactly it means by this isn’t entirely clear, but we get a sense in sections declaring that the UK will act as a “force for good” in the world, fighting human rights abuses and corruption by methods such as sanctions. The last time that the UK government used the phrase “force for good” was under Tony Blair at the time of the invasion of Iraq. It’s not a precedent that anyone with any brains should welcome.

At no point do the writers of the review consider how their proposals might look from somebody else’s perspective. It’s a serious failing. After all, imagine how this must look in Moscow. The UK is saying that Russia is the most serious threat to its security; that it will expand its nuclear stockpile; that it will increase its defence spending; that its armed forces will spend more and more time, in greater and greater numbers, beyond Britain’s borders; that it will seek to “reshape” the international order; that it will continue with the policy of sanctions; that it will support the Ukrainian army; and that it will wage information war against Russia.

A Russian could only draw the conclusion that the United Kingdom is hell bent on an aggressive and hostile policy.

That may not, of course, be the UK’s intention. But it is how it will look. This latest policy document can only strengthen the hand of hardliners in Moscow. And their response will not be one that the UK will like. If implemented, the policies in the Integrated Review are likely to be entirely counter-productive.

The death rate from Covid in the UK is the fifth highest in the world. Despite the pandemic, the British government this year was willing to give nurses a pay rise of only one percent. Yet at the same time, it is committed to spending an extra £24 billion on its military. It’s a bizarre set of priorities. Ultimately, the main loser will not be the Russians, the Chinese, or any other foreign power, but the British people themselves.