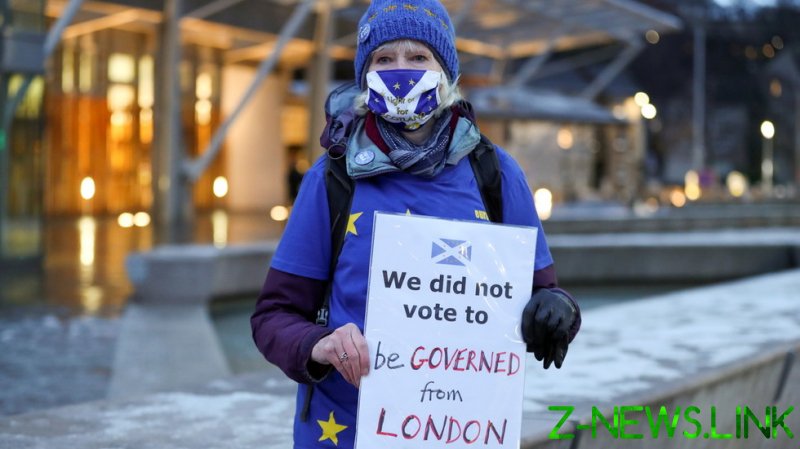 By the time the clock strikes midnight in London on Wednesday, the United Kingdom will very likely have passed the grim milestone of 100,000 deaths from coronavirus. If not midnight on Wednesday, that ominous figure will be passed on Thursday.

The timing of the event might be debatable. What’s not debatable is that the UK has the highest death rate in Europe from Covid-19, behind only the US, Brazil, India, and Mexico globally.

Right now, there are some 38,000 people in hospital and 4,000 on perilous intensive care units dependent on ventilators, oxygen, drugs, overworked and burnt-out healthcare workers – all in a precarious balance between life and death.

So far, some 6.5 million vaccines have been dispensed. This is the armed struggle Johnson is preoccupied with now, committing his government to vaccinating all over 75, everyone in seniors’ homes and the staff who care for them, frontline health workers, and the most clinically vulnerable – all by a deadline of February 15. By then, there’s little chance England will be out of its third national lockdown.

It’s a similar situation in Scotland, Wales, and Northern Ireland. With most children out of classrooms, colleges and universities holding online classes only, and all but essential shops shut, there’s little sign of normalcy returning anytime soon. It’s small wonder, then, that there are calls for local government elections due to be held in Britain on May 6 to be postponed. Scotland and Wales are due to elect new regional parliaments that day, too. In Scotland, there’s zero chance the elections to Holyrood will be postponed.

Scotland’s First Minister Nicola Sturgeon is chomping at the bit, ready to make the case that her Scottish Nationalist Party (SNP) needs to be returned with a strong mandate, laying out the grounds for a second Scottish independence referendum – to be held the sooner the better.

For Johnson, who gave himself the new title of minister of the union when his Conservatives won a landslide re-election victory in November 2019, the specter of Scotland going its own way under his watch is unthinkable – just as, perhaps, was the notion for him and all but the most alarmist epidemiologists pre-pandemic that a virus would inflict 100,000 deaths in the UK and cripple its economy with the worst economic blow seen since the early 1700s. Back then, a misguided scheme by Scottish lords to colonize the Darien swamplands between Central and South America hurt their economy so badly, the offer of joining in the Act of Union with England seemed like the right move. Now, a majority of Scots can’t wait to rip up that act and declare independence once more.

That fever is growing, and there seems to be no magic vaccine that Johnson can turn to in an effort to try and prevent the potential breakup of the United Kingdom. That minister of the union portfolio Johnson conjured up 14 months ago might have been recognition that he would have to do more to dent the fervor of Scottish nationalists – the SNP swept 48 of the 59 seats north of the border in that December 2019 election – and he has consistently maintained that the first independence referendum, held in September 2014, settled the issue for a generation.

Not so, not by a long shot. And Johnson’s pet project of Brexit has only added to the SNP’s drive for independence – and Sturgeon is more emboldened.

On Sunday, she doubled down, accusing Johnson of being afraid of democracy when it comes to letting Scots have their say in staying in or leaving the UK. And she has laid out a very clear roadmap for independence, one that will fire up SNP supporters and ensure that a new independence referendum is the only issue that matters come May 6.

When Johnson became PM, Sturgeon had broadly said the SNP would press him to allow for #indyref2. Not anymore. Now, Sturgeon says that if her party is re-elected in the spring – various opinion polls have it with anywhere between 45 and 55 percent support among voters – it will hold another referendum.

“I want to have a legal referendum,” she told the BBC. “That’s what I’m going to seek the authority of the Scottish people for in May.” And just like in a Glasgow bar fight on a Saturday night – back then when bars used to be open – Sturgeon stuck the boot in. “That’s democracy,” she said. “It’s not about what I want or Boris Johnson wants.” Ouch!

The new get-tough line from Sturgeon on #indyref2 follows her hardline approach through the coronavirus crisis. Health is a devolved power in the UK – England, Scotland, Wales, and Northern Ireland set their own rules when it comes to lockdowns – and Sturgeon’s performance and leadership these past months has seen her popularity rise to the point where she’s more popular than Johnson himself across the entire UK.

This new strategy might sound familiar to the one adopted by Catalan sovereigntists in pushing for a second referendum in October 2017, but there’s a key difference. The Spanish Constitution doesn’t grant regions referendum powers. There’s no written constitution in the UK, and Sturgeon and the SNP’s legal minds believe they can use a provision of the Scotland Act of 1998 – which set up the Scottish parliament in the first place – to grant #indyref2 under Section 30 of that act.

This isn’t some oddball legal loophole that the sovereigntists have suddenly cottoned on to – if that Section 30 order isn’t granted by Westminster, the SNP would then use its new majority to pass a bill calling for a legal referendum.

As far as the Scottish nationalists are concerned, this newfound impetus for freedom is just one side effect of Brexit. In that referendum, Scots voted to stay in Europe by 62 to 38 percent. Resentment has only grown more, with most Scots saying Johnson leads a UK government that cares little for concerns north of the border. Johnson knows only all too well that there’s a new virulent strain of nationalism on the loose – and there’s no vaccine to make it go away anytime soon.