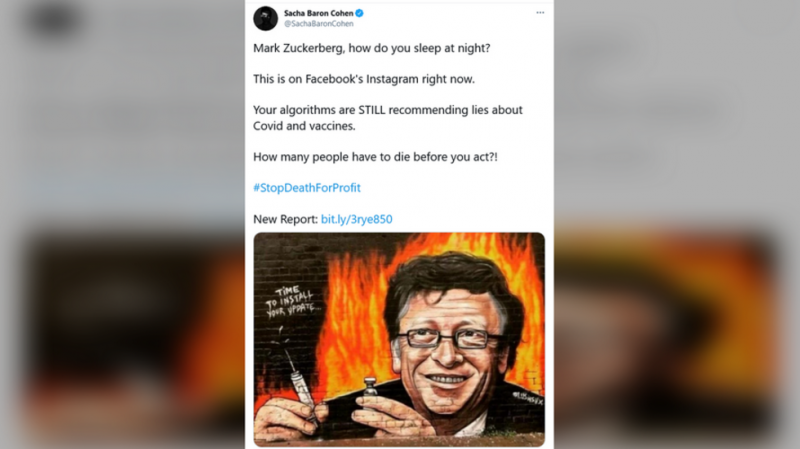 “Mark Zuckerberg, how do you sleep at night?” the “Borat” creator asked Tuesday on Twitter. “This is on Facebook’s Instagram right now. Your algorithms are still recommending lies about Covid and vaccines. How many people have to die before you act?”

The message was tagged with a #StopDeathForProfit hashtag and showed the offending artwork – a mural of billionaire software magnate Gates with flames in the background and a full syringe in his right hand. A caption by the needle said, “Time to install your update,” alluding to a conspiracy theory about vaccine proponent Gates using Covid-19 jabs to plant microchips in billions of people.

The offending street artist, known on social media as lushsux, bills himself as “the world’s first and therefore best meme artist.” He mocked Cohen for trying to have him censored, saying, “Funny how the guy who does satire for a living couldn’t spot a satire.”

Other social media users joined the artist in calling out Cohen, whose earlier works might have been branded racist and homophobic if they were subjected to the same level of censorship scrutiny he applies to others. “Hey Siri, what is satire,” conservative commentator Ian Miles Cheong tweeted.

Lushsux made his Instagram account, boasting some 875,000 followers private,  and said he archived his posts on the platform since “Sacha decided that my ha ha funnys is not approved by the ha ha funnys police.” He fired back at the comedian, posting a satirical portrait of Borat, the Cohen’s most famous character.

Lushsux is known for producing memes and comedic paintings of newsmakers and pop-culture figures, such as Elon Musk, Donald Trump, Jeffrey Epstein and Hillary Clinton.

Cohen, on the other hand, has become a pro-censorship activist – urging Facebook to hire more human moderators, instead of relying on AI for crackdowns, that saw Cohen himself being censored. Cohen has insisted that the companies have a “moral obligation” to kick out the people he considers to be “Nazi” and opined that “if Facebook were around in the 1930s, Hitler would have been allowed to post ads against the Jews.”

Some have argued that Cohen’s activism has become difficult to reconcile with his penchant for shocking humor. “The artist, lushsux, is famous for his memes and edgy sense of humor – something Cohen used to be widely known for,” journalist Libby Emmons said.