Home / WORLD / ‘Boogaloo white supremacist’ or upstanding citizen? What we know about the alleged Kenosha shooter

‘Boogaloo white supremacist’ or upstanding citizen? What we know about the alleged Kenosha shooter 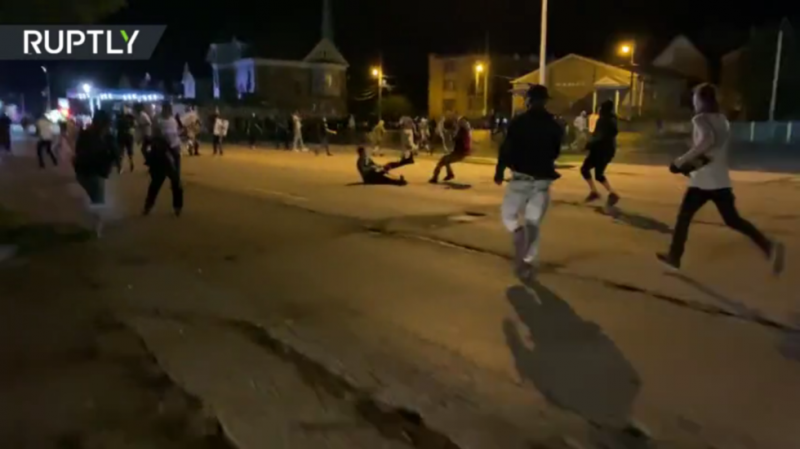 Black Lives Matter rioters took to the streets of Kenosha again on Tuesday night, for the third night of looting and arson since police shot and paralyzed Jacob Blake, a black man, on Sunday. This time, the rioters were met by armed citizens who took to the streets and rooftops to defend their property.

With the situation tense, it wasn’t long before violence broke out. Video footage shared on social media showed one rioter shot in the head outside a car dealership, moments after a crowd threatened to burn the business to the ground. It is unclear what provoked the shooting, but witnesses say the victim lunged at the attacker before he was shot down. An exchange of what sounds like pistol and rifle shots can be heard in the video.

The alleged attacker then fled the scene, but was pursued by an enraged crowd. As the mob caught up with the young man, he fired again, apparently hitting one in the stomach and another in the bicep. Gunshots can be heard from multiple sources, indicating that some people in the crowd attempted to fire at the shooter. The man hit in the bicep was carrying a pistol at the time.

The young man then walked to a nearby police car with his hands up. What happened next is unknown. Police later announced that two people were dead and a third injured, but provided no further details.

In the absence of clear information, the online rumor mill kicked into overdrive. The man was first described as a “white supremacist,” and possibly a member of the ‘Boogaloo Boys’. The Boogaloo movement is a loose association of gun owners who mostly lean libertarian or anarchist. Some of its members’ unofficial aim is to push America into a second civil war, for no real ideological reason.

Video footage from Kenosha does show a number of alleged Boogaloo Boys near the scene of the shootings. However, they openly declare their support for the Black Lives Matter movement, and while some vowed to protect property from criminals, the level of crossover between them and the citizens who showed up to protect their businesses is unknown.

One self-described ‘Boogaloo Boy’ said on Twitter that the shooter was not affiliated with the movement, though some witnesses on the ground said the opposite. The alleged shooter was interviewed earlier on Tuesday night, and told Blaze TV’s Elijah Schaffer that he was in Kenosha to protect property, armed with lethal ammunition. There is no evidence of him expressing any white supremacist beliefs.

The shooter’s identity is still unknown, but some online sleuths claim he is a 17-year-old militia member who may have come to Wisconsin from out of state. The teenager’s Facebook page showed the supposed shooter posing with a rifle, and posting in support of law enforcement. However, the page was suspended on Wednesday morning as threats against the teen poured in on social media. Police have not commented on his identity.

250 National Guard troops were deployed to Kenosha on Tuesday night. However, a communications adviser to President Donald Trump said that local law enforcement requested a force of 750 Guardsmen, and White House Chief of Staff Mark Meadows offered 500 additional troops – a reinforcement that, apparently, was not immediately approved by Governor Tony Evers.