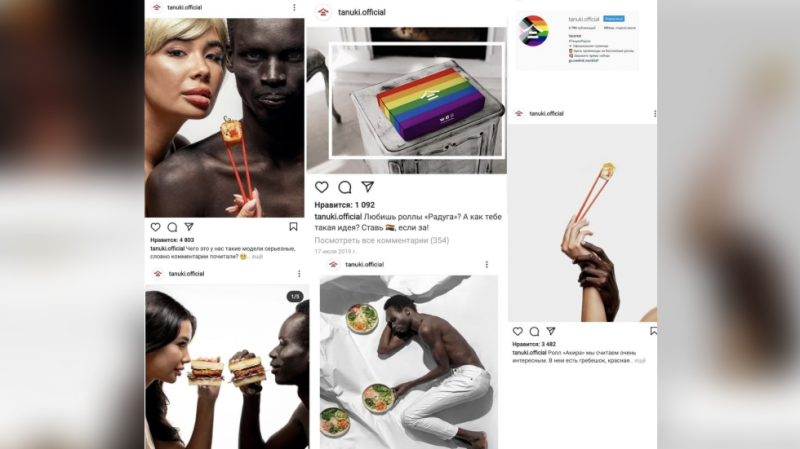 Police in the Russian capital confirmed on Tuesday that they had “received a message from a woman claiming that all of the Tanuki restaurants in Moscow had been rigged to blow up. Authorities checked the establishments and no bombs or explosives were found,” a source told TASS.

The dramatic scenes unfolded as the chain called on tech companies to blacklist channels belonging to a far-right group known as “Male State,” which has told its followers to take action against two separate sushi businesses over adverts that feature black men, which it says are “promoting multiculturalism.” Tanuki also came under fire for a rainbow flag delivery box that, critics say, resembles and LGBT+ pride flag.

The Moscow branch of Sushi Yobidoyobi, which had also been targeted by the movement for adverts featuring diversity, issued an apology and retracted the marketing material earlier this week. According to its founder, the chain’s leadership had begun receiving threats and intimidating messages, while detractors were placing large orders and refusing to pay for them, as well as leaving negative comments online. Konstantin Zimen, the group’s co-founder, said last week that “all this is very strange, considering that we did not even try to” promote the agenda,” but simply made very standard visuals for social networks.”

Tanuki, however, told RT it would not back down in the row, and that its lawyers had launched an appeal to shut down Male State’s channels, which it argues are “spreading calls for aggression and racism.” “We have no plans to remove any posts, despite the harsh heckling,” a spokesperson said. The company said it had been receiving threats by phone as well, and that, while some were traced to within Moscow, others originated in countries like Kazakhstan and Ukraine.

In comments to journalists later on Tuesday, Kremlin spokesman Dmitry Peskov said that “if there are any violations of the law, and if there are relevant statements, then of course the authorities must respond to this.” However, he argued, the question was one for law enforcement rather than the President.

Male State was reportedly formed in 2016 on the social networking site VKontakte. It is described by analysts as a pro-patriarchy nationalist group, and has previously come under fire for reportedly harassing women and minority groups.

The Tanuki chain has been hit by violence in the past. In 2012, the head of the company, 52-year-old Irina Ziroyan, was killed in a shooting outside one of its restaurants in Moscow. The Armenian businesswoman died at the scene, while her bodyguard later succumbed to his injuries in hospital. Officers investigating the crime said they could not rule out that it had been a contract killing.