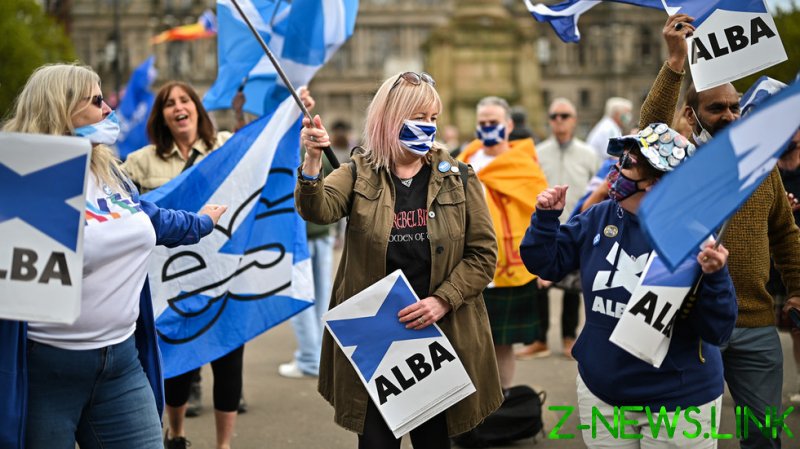 On May 3, The Times published a bombshell front-page report alleging that Tehran was “almost certainly” attempting to interfere in the impending Scottish parliament elections, “encouraging Scottish separatism,” in order to “attack the constitutional integrity” of the UK.

The source of this shocking claim was a preview of a report issued by neoconservative think tank the Henry Jackson Society (HJS), authored by academic Paul Stott, who in turn was said to have relied on data provided by social media analysis firm Graphika.

Seismic stuff, indeed, although proof of this mass destabilization campaign was unforthcoming, the only purported meddling cited being the Facebook account of an apparent “fake Iranian online persona mocking the Scottish Conservatives” – one of 446 alleged Tehran-directed pages the social media monopoly announced that it had closed in February, in its regular review of “Co-ordinated Inauthentic Behaviour” on the network. The HJS coincidentally partners with Facebook on countering violent extremism on the platform.

Despite this self-evidently flimsy foundation, The Times’ story was amplified by the BBC, then widely recycled –virtually verbatim– by almost every mainstream UK news outlet, and the Scottish media, including the pro-independence National.

However, not all were quite so convinced. Campaign group Business for Scotland did what no journalist seemingly thought to do, and actually contacted HJS to learn more. The think tank revealed references to Scotland were a tiny fragment of the report, confirmed the investigation relied to a degree on Facebook’s aforementioned “Co-ordinated Inauthentic Behaviour” review, and was unable to offer any other specific examples of Iranian interference in Scotland.

No journalist saw fit to mention either that the HJS has extremely close connections with the ruling Conservative party. Michael Gove, Cabinet Office minister and notorious neoconservative, was a director of the think tank between January and June 2017, and is among several Conservative MPs who has received thousands in donations from the HJS in recent years.

The organization’s own funding is quite so opaque that in December 2014, it withdrew its financial support for two parliamentary groups focused on homeland and international security rather than adhere to transparency rules obliging it to reveal the identities of corporate sponsors, on the basis its donors “are entitled to privacy.”

Still, it’s known the Home Office gifted the HJS over £80,000 between 2015 and 2017 to produce a report on UK connections to Islamist terrorism. It’s unknown how much if any of this sum was spent on paying damages to Muslim educational channel Huda Television, after the think tank confused it in a 2018 report with a similarly named Egyptian station, accusing the broadcaster of harboring a “radical agenda” and of hosting terrorist content.

Islam and the Muslim world are frequent targets of the HJS’ rabid ire, to the extent one of its founders has dubbed it “a far-right, deeply anti-Muslim racist organisation, run in the most dictatorial, corrupt and undemocratic fashion and utilized as a propaganda outfit to smear other cultures, religions and ethnic groups.” In April, the think tank’s Executive Director defended US detention camp Guantanamo Bay – where predominantly Muslim detainees are indefinitely detained with trial, brutally tortured then often released without charge – as a “grubby” way of keeping Western citizens “safe”.

However, Russia has also ended up in the HJS’ crosshairs from time to time. In November 2018, it issued a widely-ridiculed report contending that as many as half the Russians residing in the UK, around 75,000 people, were secretly intelligence operatives. The ludicrous claim was, perhaps predictably, hungrily lapped up by much of the Western media.

Discussion of Graphika’s own dubious track-record was also absent from news outlets’ rehashes of The Times’ suspect exclusive. The company, which modestly brands itself “the best in the world at analyzing how online social networks form, evolve, and are manipulated” – counts among its partners the US Department of Defense, Defense Advanced Research Projects Agency, and the Senate Select Intelligence Committee, and has an eerie habit of cropping up at politically-charged junctures.

For instance, just prior to the December 2019 UK General Election, then-Labour leader Jeremy Corbyn revealed a document containing details of secret negotiations between London and Washington, some related to privatization of the National Health Service. Within days, Graphika published a report asserting that the document’s leak, and Corbyn’s promotion of it, were part of a Kremlin information operation. Despite conceding it lacked “all the data” to “make a final determination” on whether this was in fact true, the unsupported findings were covered the world over.

That report’s lead author was Ben Nimmo, a self-declared “expert” on online disinformation with no discernible professional or educational background in social media, data analysis, information technology, or digital research, who, over his controversial career, has had much to say about meddling in Scottish politics.

Numerous news outlets repeated the charge, despite Nimmo’s work primarily focusing on the output of a set of Twitter accounts he merely believed to be suspicious, which posted tweets after the referendum – often in Russian – suggesting there could be irregularities in the vote. It may be instructive to note at this point that the cyber sleuth has rather embarrassingly accused numerous real people of being ‘bots’ and ‘trolls’ in the past.

Given the HJS’ sole example of Tehran’s dastardly meddling in Scotland is a single Facebook page that the network itself publicly identified and banned months ago, what accounts for claims of Iranian interference surfacing three days prior to the Scottish parliament elections? One answer could be that the SNP is widely forecast to secure a majority, with some polls pointing to a staggering 32% lead for Nicola Sturgeon’s upstart party.

That outcome would no doubt further energize the country’s independence movement, already in the ascendance due to UK withdrawal from the European Union, and London’s dreadful handling of the coronavirus pandemic. Implying Iran is villainously supporting the SNP could discredit the party, if not cast doubt on the vote’s integrity – just as loud yet empty charges of Russian meddling were exploited by so many to discredit the results of the Brexit referendum and 2016 US Presidential election.

One needn’t be a cynic to reach such an interpretation, or suggest those eventualities would no doubt be most welcome to the UK government, and the very ministers with which the HJS has such a close relationship. But the Western media is only interested in conspiracies when they involve state-mandated “enemy” countries.