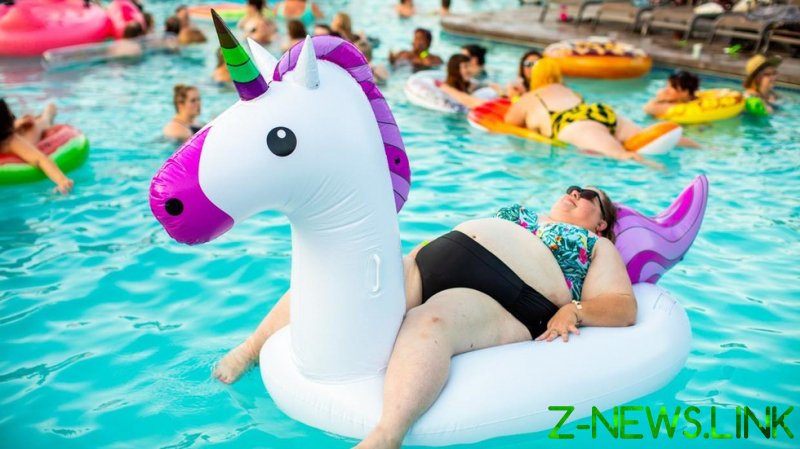 Now, as usual with woke cultural weapons, this poisonous concept comes wrapped in silk, with a pink bow. Simply by stubbornly ignoring the concept’s malicious and deadly end-road, its advocates merely choose a name that sounds warmhearted and uplifting. Body Positive – who could be against that? Nothing but inclusivity and puppy dogs.

But to those seasoned by hard experience into suspicion, this type of deceptive buzzwording is immediately recognizable as a typical ‘trojan horse’ of progressive wordsmithing. For the stark reality of ‘body positive’ is anything but positive, or healthy, or good. It is heart disease, house-bound morbid obesity, infertility, early death, limb-loss from diabetes, and misery.

All masquerading as ‘freedom from norms.’ It is, like so many culturally-dissipating constructions, a way to flip the polarity of values, a complete 180°, so that up becomes down. Fat must be beautiful, to avoid hurting feelings, therefore nothing can be beautiful.

This is all achieved by masquerading something irrational in an easy compassion. In the case of Body Positive, a movement aimed at women, it is to say that ‘all bodies are beautiful’ (really, they are talking about the fat ones). A superficial reaction to that proposition might easily be to agree that no one should feel ashamed for being fat. If only it were that simple.

It is a deception, a sleight-of-hand, which utterly and fundamentally redefines values so that what is good becomes bad, and vice versa. If you do not immediately sense the flip side, or the larger picture, to embracing ‘all bodies as beautiful,’ then you can enter that mental maze (to potentially never return) and begin to intentionally grow obese. Many do this to show solidarity. But the sad truth is, by negating objective beauty standards you are playing a personal game against nature. You are trying to destroy beauty as a concept, which you will never do.

We’ve all seen it at this point, great hulking monsters playing flutes, enormous billboard ads with semi-nude lingerie models buried beneath folds of flesh like waves of sugar fondant. Proud advertising statements from defiant fat women stating that they are ‘beautiful’ and ‘you must love them.’

In the Western corporate world of advertising they appear to enjoy a popularity. Of course, to the naive, the ‘social causes’ of mega-corporations are never suspect, they are merely ‘doing good.’ However, to those with experience, they see the ads the way Roddy Piper does in the film ‘They Live’: they see a marketing strategy appealing to vice, using emotion and sentimentalism to sell more products.

Essentially the trick is simple – take anything that a credulous wokeist may not want to do, such as exercise, or anything requiring work or discipline (something easy to dislike) and blame it on oppression or ‘cultural conventions’ that ‘must be changed.’ It is never their fault, and any kind of standard or tier (of beauty or anything else) no matter how natural and instinctive, becomes a plaything for relativist fabricated victimization. Then you can sell them things.

There is no concern for overweight people, not in reality, for concern requires an old concept, known to parents and sages of the past: tough love. That nothing good comes from taking a lazy excuse out of anything, and that health of the body often signifies health of the mind, as it takes self-realisation and self-discipline to do anything improving, sophisticated, or admirable. There is no easy way to anything.

There is a rational and objective tier to health and to the natural human observance of health in other bodies, which takes the form of noting ‘are they overweight’?

And so, as we speak, there are impressionable girls intentionally adding fat to healthy bodies, some not even out of hunger so much as out of activist solidarity with the body-positive movement. It’s hard to believe, but it’s true. There are those that will lash out vociferously at advertisements for gyms and diets, or the idea that losing weight is a positive accomplishment, all to signal allegiance to an irrational woke fabrication. They are only fighting against themselves.

As everyone knows, with increased diabetes, cancer rates, heart problems, and mobility issues, these ideas are dangerous. They are foisted on the young and the naive, and if they are effective they will likely turn their bloodstream to glucose syrup and eventually kill them. If they adopt these notions, their minds will vanish into the mental maze of inverted values, possibly forever, denying the evidence of their eyes and other senses, for a deceptively simple ideal of compassion which negates any truth. For all truths are ‘unfair.’

They will undergo a fundamental change, and will forever smugly deny themselves any attempt at human uplifting and self-improvement.

Body Positive: it sounds like a hug party, but it is the vice-like death-hug of a thousand pounds of flab.