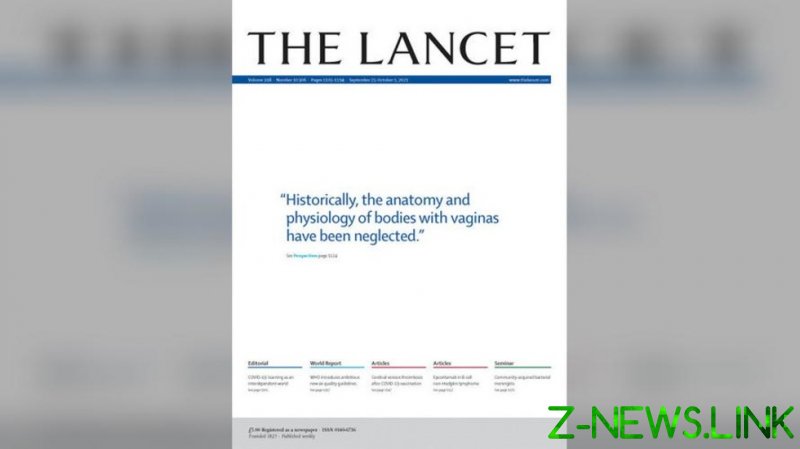 “Historically, the anatomy and physiology of bodies with vaginas have been neglected,” says the pull quote on the cover of its latest issue, with the publication date of September 25.

By Friday evening, it had accumulated fewer than 300 likes and retweets combined – against the 4,600-plus replies and quote-tweets altogether, in a rather impressive ratio, which was also commented upon.

“Bodies with vaginas? You mean women? Where does this stop?!?” was the reaction by tennis great Martina Navratilova.

“How completely awful. Just wrote the Lancet to tell them to take me off their list of statistical reviewers and cancel my subscription and never contact me about anything ever again,” tweeted Dave Curtis, a retired psychiatrist doing genetics research. “Absolutely inexcusable language to refer to women and girls.”

“We wish to make a formal complaint about the dehumanising and straight up sexist cover story on the latest edition of the Lancet,” said the group Women Make Glasgow.

Others commented that the Lancet editors seem to have “lost their minds,” or that “body with a vagina” is a step down from “birthing person,” the most recent politically correct phrase coming from the US.

The contentious phrase appears in the two-page article by the Lancet’s senior editor Sophia Davis, reviewing an exhibition called ‘Periods on Display’ at the Vagina Museum in London’s Camden Market. While the pull quote is accurate, Davis does use the term “women” several times, as well as “people who menstruate.”

Florence Schechter, who makes an appearance in Davis’s article, founded the Vagina Museum in 2017, after discovering there was a penis museum in Iceland. After doing pop-up exhibitions, the museum moved into its current space in 2019, but faces closure at the end of September when its lease runs out. Davis makes a case for providing it with funding because it has “a strong sense of social purpose and is bold and exuberant in its aim and messaging.”

The Lancet is among the world’s oldest and most prestigious medical journals, established in 1823.