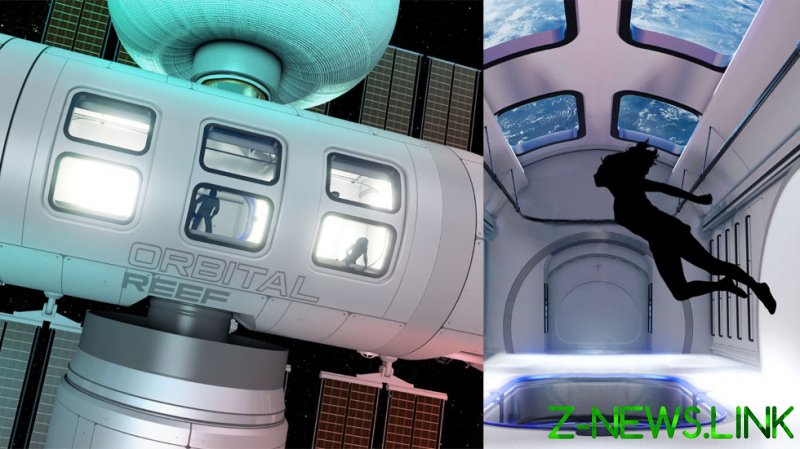 Bezos’ aerospace firm and its partner Sierra Space unveiled the plans on Monday in a joint press release, saying they are aiming to build “a commercially developed, owned, and operated space station” dubbed the “Orbital Reef,” which they intend to have up and running in some capacity sometime between 2025 and 2030.

“For over sixty years, NASA and other space agencies have developed orbital space flight and space habitation, setting us up for commercial business to take off in this decade,” said Brent Sherwood, a senior executive at Blue Origin. Janet Kavandi – a three-time NASA astronaut and Sierra Space president – added the project would help to “open up space for commercial research, manufacturing, and tourism.”

The station will be launched into orbit using Blue Origin’s New Glenn rocket, and will reportedly have a 10-person capacity, with about the same internal volume as the International Space Station (ISS). While the companies’ promo boasted that the station will be a “revolution in space travel and commerce” and will “reimagine living and working in space,” it provided few details about how it might actually operate, how many modules it could feature or how it will overcome the massive logistics hurdles involved in space missions.

“Seasoned space agencies, high-tech consortia, sovereign nations without space programs, media and travel companies, funded entrepreneurs and sponsored inventors, and future-minded investors all have a place on Orbital Reef,” the joint statement continued, adding that the “Orbital Reef will provide anyone with the opportunity to establish their own address on orbit.”

So far, estimates for how much the project might cost have been kept under wraps, with Sherwood declining to provide “a specific number” during a conference call with reporters, noting those figures are commercially sensitive. Other company executives on the call were also tight-lipped about cost estimates, according to CNBC.

A number of other firms and universities have teamed up with the two principal companies to build the station, including Boeing, Redwire Space, Genesis Engineering and Arizona State University – the latter of which leads a consortium of other academic institutions as part of the Orbital Reef University Advisory Council, among them Oxford, Stanford and the University of Michigan.

Boeing, which will assist with station operations and maintenance, noted the initiative was especially exciting as it “does not duplicate the immensely successful and enduring ISS, but rather goes a step further to fulfill a unique position in low Earth orbit where it can serve a diverse array of companies and host non-specialist crews.”

Bezos’ firm carried out its first successful space tourism flight in July, taking the world’s richest man into suborbital flight alongside renowned female aviator Wally Funk, who at the age of 82 became the oldest person to visit space. That record was smashed again just a few months later, however, after another successful flight earlier this month featuring 90-year-old actor William Shatner of Star Trek fame.

Ex-Senator John Glenn, however, retains the record for the oldest person to reach orbital space at the age of 77, after spending nearly 10 days in low-Earth orbit in 1998 as part of NASA’s Space Shuttle mission. By contrast, Funk and Shatner’s suborbital flights lasted only about 10 minutes.