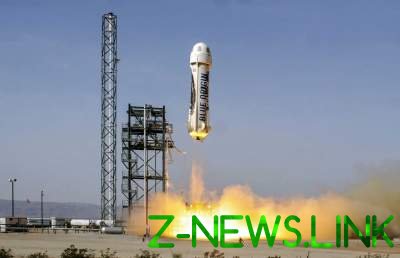 Blue Origin has implemented the next (11-th) test launch of its reusable suborbital vehicle, New Shepard, in preparation of the device for future manned space missions.

Booster capsule with a New Shepard started from a platform in West Texas in 16:35 Kyiv time. For the company of Jeff Bezos it is the second flight test vehicle in the current year and for the fourth flight of the new version of the reusable rocket.

As before, on Board the ship was empty, only 38 medical and biological experiments as payload. Nine of them were selected in the framework of NASA’s Flight Opportunities Program, which enables researchers to conduct their experiments in space. Among them – 3D printing in space and the observation of the behavior of cosmic dust in microgravity.

During this test, the New Shepard rose to a height of 106 km, after which there was a separation of capsule from booster. At this altitude, every passenger aboard would experience weightlessness. After 8 minutes, the rocket returned to Earth, having made a vertical landing, and after 2 minutes by three parachutes successfully landed and the capsule. Stream flight were traditionally carried on the website of the company.

See also:  In Berlin for 600 UAH: from Lviv launched a new flight

Until now, test flights, Blue Origin has been very successful. Suborbital New Shepard spacecraft successfully landed in nine of ten cases, each time proving its commitment to safe manned missions even in emergencies. However, the exact timing of the sending of the first passengers to the border with outer space is not yet defined. It is expected that this will happen this year.