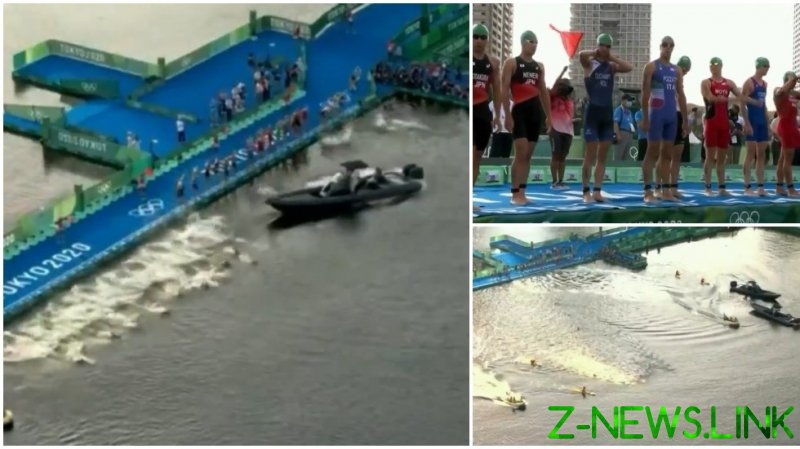 As the 56 competitors lined up to begin the race, around half of them found their path still blocked by a vessel which was adjacent to the start platform.

A host of athletes dived into the water to launch their bid for Olympic glory after the starting signal sounded – while their rivals remained stranded.

The boat, which was carrying a camera, soon veered out of the way but it was already too late as the race had to be restarted.

The chaos continued though as many of the men who had taken to the water did not hear the horn calling them back to the start, meaning a flotilla of boats and jet skis was deployed to head them off and turn them back.

The scenes caused widespread bemusement online, but some claimed they had endangered the athletes.

The race did eventually get going again and was won by Norway’s Kristian Blummenfelt, ahead of Great Britain’s Alex Yee and Hayden Wilde of New Zealand.

“I saw the boat on the left side and found it quite strange that the starting bell came,” gold medalist Blummenfelt said afterwards.

“I felt that the boat was still in front of the left side of the pontoon, so when I jumped in, I thought that this would most likely be pulled back and go for another start.

“I just tried not to go too slow but keep a little bit left and look at it in a positive way that I actually got a little pre warm-up before the start.”

In hot and humid conditions in Tokyo, Blummenfelt came home in a time of one hour, 45 minutes and four seconds, falling to the floor after crossing the finish line and then being taken to see the medics.

He is the first Norwegian to win a medal at the Tokyo Games.