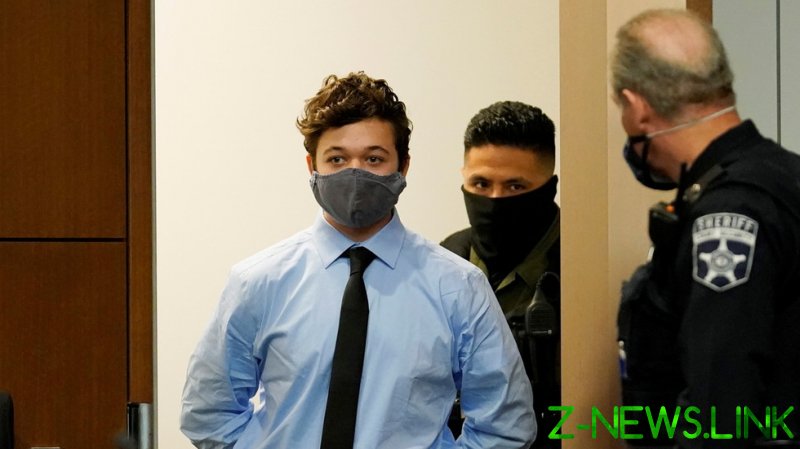 Photos of Rittenhouse’s outing earlier this week at Pudgy’s Pub in Mount Pleasant, Wisconsin, began circulating on social media on Friday, spurring outraged responses and an investigation by local police. It turns out that it’s legal in Wisconsin for an 18-year-old to drink beer at a tavern in the company of a parent or guardian – and police said that contrary to online speculation, the incident didn’t violate the teen’s $2 million bond agreement.

The photos were taken on Tuesday, the same day that Rittenhouse entered a plea of not guilty to charges of murder and attempted murder at his arraignment in Kenosha. Rittenhouse, then 17, shot and killed two rioters and wounded a third at a Black Lives Matter protest on August 25 in Kenosha. The teen’s defense lawyers – citing video footage that showed him being attacked by three men – have claimed he acted in self-defense.

Rittenhouse quickly became a symbol of America’s political divisions, with Democrat politicians ranging from President-elect Joe Biden to US Representative Ayanna Pressley smearing him, without evidence, as a white supremacist. Republicans, on the other hand, raised money for his bond and championed his cause as a fight for self-defense and Second Amendment rights.

The polarization was again evident when the Pudgy’s Pub pictures surfaced, with BLM supporters outraged that Rittenhouse would dare drink a beer, smile or wear a provocative T-shirt. Skin color was again the underlying theme.

“Neo-fascism is about absconding all rules for themselves while enacting genocide on us – with applause and without consequence,” BLM Chicago said Saturday on Twitter.

Others suggested that Rittenhouse, an Illinois resident who traveled to Kenosha for his arraignment, may have broken some law by being out of state, and that the tavern should be stripped of its liquor license, even though he was drinking legally. Still others renewed calls for violent attacks on the teen and set about trying to ruin the tavern’s reputation with false reviews.

“The ‘free as f***’ shirt is a nice touch to the `f*** you’ that is our judicial system,” one Twitter commenter said. “This country may just be broken beyond repair.”

Rittenhouse supporters countered by arguing that he acted in self-defense and was entitled to legally enjoy a beer. “Hero of the republic,” one commenter tweeted. “All he was doing was stopping the coup of the Wisconsin government in Kenosha.”

Tensions over violence in Kenosha were exacerbated earlier this week, when District Attorney Michael Gravely announced that the officer who shot Jacob Blake seven times in the back – setting off BLM protests in the city – will not face state criminal charges. Blake was armed with a knife and had resisted efforts to arrest him, including being shot with a Taser, before apparently attempting to leave the scene in his car, Gravely said on Monday.

“F*** everything about this, and while we’re at it, f**k anyone who supporters murderer Kyle Rittenhouse,” incensed actor Vincent Martella said.