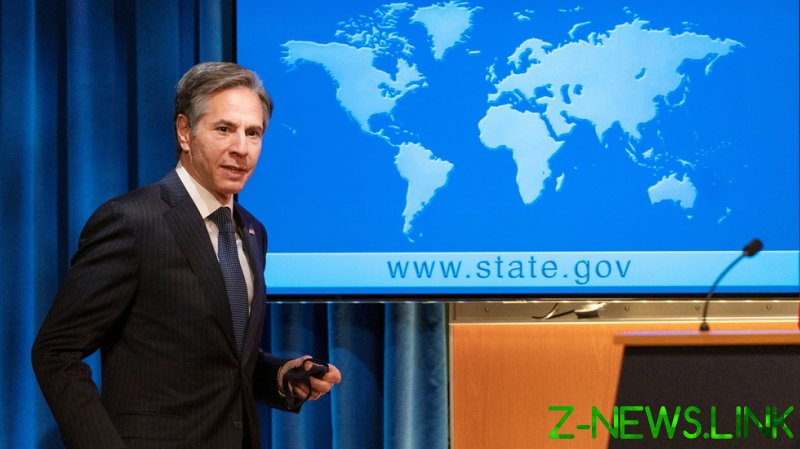 More remarkably, while embracing the cause of global democracy, Blinken appeared to have little time for democracy as practiced in the US.

The goal of Blinken’s speech, delivered virtually to the American people on Wednesday, was to introduce the Biden administration’s newly-issued “Interim National Security Strategic Guidance,” that is supposedly offering a distinctive Biden vision of America in the world. This vision, it turns out, is a very gloomy one. It depicts a world beset by rising authoritarian powers and full of countries pursuing their own narrow, selfish national interests. “American leadership” is under threat everywhere, even in the US:

“At a time when the need for American engagement and international cooperation is greater than ever… democracies across the globe, including our own, are increasingly under siege. Free societies have been challenged from within by corruption, inequality, polarization, populism, and illiberal threats to the rule of law. Nationalist and nativist trends – accelerated by the COVID-19 crisis – produce an every-country-for-itself mentality that leaves us all more isolated, less prosperous, and less safe. Democratic nations are also increasingly challenged from outside by antagonistic authoritarian powers. Anti-democratic forces use misinformation, disinformation, and weaponized corruption to exploit perceived weaknesses and sow division within and among free nations.”

The Biden-recommended solution is to cobble together US-led alliances to fight these dark foes. Over and over, the Biden document issues stirring calls for the “uniting of the world’s democracies to combat threats to free societies.” The US must “join with likeminded allies and partners to revitalize democracy the world over,” the document reads. “We will stand with our allies and partners to combat new threats aimed at our democracies, ranging from cross-border aggression, cyberattacks, disinformation, and digital authoritarianism to infrastructure and energy coercion…. We will defend and protect human rights and address discrimination, inequity, and marginalization in all its forms.”

The Biden administration document is of a piece with its foreign policy as a whole: long on talk about “values,” short on specifics as to tangible American national interests. The word “values” comes up no less than 25 times in 24 pages.

In this, the Biden administration has charted a course very different from that of its predecessor. Donald Trump had campaigned in 2016 on the theme of restoring American manufacturing supremacy; confronting China’s global ambitions to become the world’s No. 1 economic power; ending America’s wasteful military interventions, particularly in the Middle East; renegotiating trade agreements with Cold War allies that worked to the detriment of the US; and improving relations with Russia with a view to possibly forging a geopolitical alliance directed against China.

For a variety of reasons, Trump failed to pursue most of these goals with any real consistency and determination. Nonetheless, they were goals that involved the securing of real, material benefits for the American people and pointed the way toward a world of nation-states, each pursuing its own national interests, and unencumbered by rickety, museum-piece military alliances such as NATO.

It was obvious that Biden, a long-standing member of Washington’s foreign-policy-making elite, would have very little time for any of this. His familiar bromides during his State Department speech last month came as music to the ears of the American national security establishment: a resounding endorsement of the policy of perpetual wars and perpetual sanctions directed at global miscreants who fail to live up to American “values.”

“We must start with diplomacy rooted in America’s most cherished democratic values: defending freedom, championing opportunity, upholding universal rights, respecting the rule of law, and treating every person with dignity. That’s the grounding wire of our global policy….That’s our inexhaustible source of strength. That’s America’s abiding advantage,” Biden said in his speech earlier this year.

Blinken, to his credit, appears to have grasped that public support for a foreign policy promising a global crusade on behalf of “values” and “democracy” will be in short supply unless the administration can specify real US national interests it intends to secure that will materially benefit the American people.

For this reason, he started his speech with a promise “to make your lives more secure, create opportunity for you and your families, and tackle the global crises that are increasingly shaping your futures.” Foreign policy, he explained condescendingly, “can sometimes feel disconnected from our daily lives.” Why? Because “it’s often about people and events on the other side of the world, and it’s about things you don’t see… But it’s also because those of us who conduct foreign policy haven’t always done a good job connecting it to the needs and aspirations of the American people.”

Apparently, the American people are too dim to realize that fighting pointless wars in the Middle East, expanding NATO, antagonizing Russia, sanctioning Iran, interfering in the internal affairs of China and promoting regime change in countries such as Syria and Venezuela are bringing tangible benefits to their lives. The American people fail to grasp that any threat to democracy anywhere is a threat to democracy everywhere.

To his dim-witted American listeners, Blinken strove to explain that fighting for “democracy” and building coalitions of “democracies” are in their interest. Showing up America’s “adversaries” will bring peace and prosperity to the lives of ordinary Americans:

“Authoritarianism and nationalism are on the rise around the world. Governments are becoming less transparent and have lost the trust of the people…. But the erosion of democracy is not only happening in other places. It’s also happening here in the United States. Disinformation is rampant here. Structural racism and inequality make life worse for millions. Our elected leaders were targeted in the violent siege of the Capitol just two months ago…. Shoring up our democracy is a foreign policy imperative. Otherwise, we play right into the hands of adversaries and competitors like Russia and China, who seize every opportunity to sow doubts about the strength of our democracy.”

By attending to its own democratic inadequacies, the US will be laying the “foundation” for “defending democracy around the world for years to come.” And this segues pleasantly to the familiar policy of US-sponsored regime change: “We will encourage others to make key reforms, overturn bad laws, fight corruption, and stop unjust practices. We will incentivize democratic behavior.” Incentivize, of course, by using the usual instruments the US uses to bully and coerce weak, recalcitrant states.

Amusingly, Blinken promised that the Biden administration would abjure the use of force to bring about democratic change. The US “will not promote democracy through costly military interventions or by attempting to overthrow authoritarian regimes by force,” he said. “We have tried these tactics in the past. However well intentioned, they haven’t worked.”

Such promises are of course not worth the paper they are written on. Direct military intervention isn’t the issue. US-sponsored insurgencies such as the one in Syria or the ones in Central America in the 1980s have been as catastrophic as direct bombings and invasions. Economic sanctions also often cause at least as much damage and loss of innocent lives as military intervention.

The Biden administration is two months in, and the horrific sanctions regime in Syria remains in place. Trump’s sanctions on Iran also remain in place, as are the sanctions on Venezuela. Regime-change is the order of the day. Blinken declared the other day that he and Venezuela’s bogus “interim president”, Juan Guaido, “discussed our unwavering support for democracy in Venezuela.”

Most incongruously, Blinken promised that, under Biden, “diplomacy – not military action – will always come first.” Really? What about last week’s air strike in Syria that led to the loss of at least 22 lives? Where was the “diplomacy”? Was the sovereign state of Syria consulted? Was Russia? The UN Security Council? Of course not. However, Blinken hastened to reassure his audience, the US will undertake such action “only when the objectives and mission are clear and achievable, consistent with our values and laws, and with the informed consent of the American people. And we’ll do it together with diplomacy.” In other words, mellifluous-sounding verbiage that plays well in the American media but triggers bemusement and rage everywhere else.

The foreign-policy vision articulated by Blinken is a familiar one. It is the defining characteristic of Democratic administrations – those of Clinton, Obama and, to an extent, Jimmy Carter: US aggression and interventionism, but justified by reference to highfalutin notions such as democracy, human rights and humanitarianism. The resulting misery is always the same.