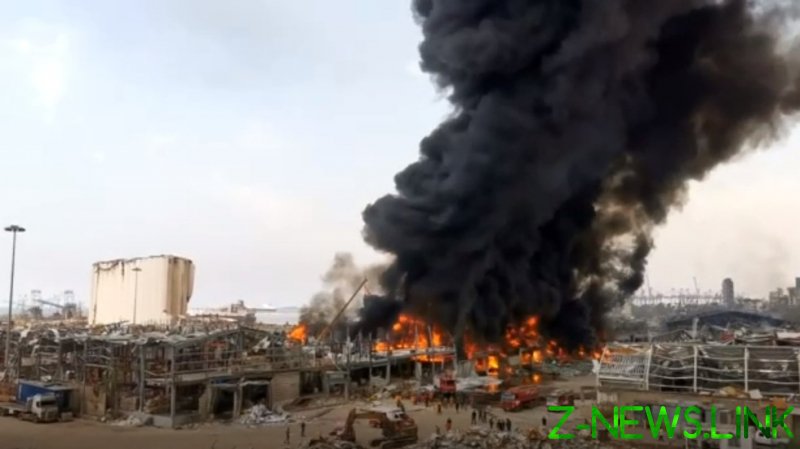 The fire apparently began earlier on Thursday, with social media users flooding their pages with footage of flames rising up in the devastated port area. Some publications suggested that the bang was heard before the blaze.

As locals wondered what could have caused the blaze, a Reuters source in the Lebanese military suggested that a stockpile of tires and oil were on fire at the port.

Beirut authorities have dispatched a handful of fire brigades to the port, while the army has vowed to use its helicopters to douse the flames from above. Earlier on Wednesday, firefighters dealt with another blaze that broke out at a site full of mixed waste, scrapped timber and tires.

The fire comes as the Lebanese capital recovers from the massive explosion that rocked the city on August 4. The Port of Beirut – the epicenter of the blast – was completely devastated, and the capital was significantly damaged.

At least 190 people perished in the explosion, another 6,000 were injured, and roughly 300,000 were left homeless. It is thought that 2,700 tons of ammonium nitrate – a substance predominantly used in agriculture – fueled the explosion. The stash had apparently been stored in a portside warehouse in unsafe conditions since 2014.

The subsequent wave of public anger forced Lebanon’s government to resign. A new prime minister was appointed as the outrage mounted, but even that seemed unable to quell the unrest that saw protesters and riot police clashing in the streets.