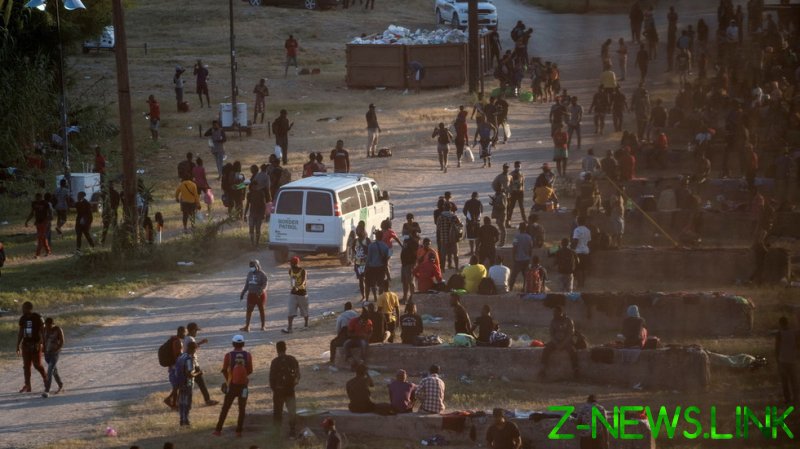 “The sheer negligence of the Biden administration to do their job and secure the border is appalling,” Abbott, a Republican, said in a statement on Thursday. “I have directed the Department of Public Safety and the Texas National Guard to surge personnel and vehicles to shut down six points of entry along the southern border to stop these caravans from overrunning our state.”

“Unlike President Biden, the State of Texas remains committed to securing our border and protecting Americans.”

At the International Bridge in Del Rio, Texas, more than 8,000 migrants have crossed into the US and are currently waiting to be apprehended by Border Patrol officers, Fox News reported on Thursday. The crowd doubled in size from 4,000 to 8,000 since Wednesday, with a law enforcement source telling the network that many are Haitians.

Drone footage posted by Fox shows the scale of the crowd, which has reportedly overwhelmed Border Patrol. According to Abbott, Border Patrol asked the State of Texas to step in and close the crossings.

Del Rio is just one of three dozen such crossing points along the Texas-Mexico border. Migrants arriving at these crossings can either claim asylum or present themselves to Border Patrol to be arrested and then released into the US, with this Obama-era ‘catch and release’ policy reinstated by President Joe Biden earlier this year.

Additionally, the Biden administration has suspended former President Trump’s ‘Remain in Mexico’ policy, which required all incoming migrants to make their asylum or entry claims from Mexico and wait there until these claims were processed. Biden has also modified Trump’s policy of turning back all border crossers during the Covid-19 pandemic, carving out an exception for under-18s, leading to a surge in unaccompanied minors making the trip from Central America to the US.

However, the vast majority of border crossers in 2021, according to Customs and Border Protection data, are single adults.

Biden’s policies have been decried by Republicans like Abbott, and even members of his own administration have blamed these policies for a record influx of migrants since the president took office. Customs and Border Protection announced on Wednesday that its agents encountered 208,887 illegal migrants in August, an increase of more than 300% since August 2020. Every month this year so far has seen record numbers of encounters compared to the same months in 2020, 2019 and 2018, and 1.1 million people have illegally crossed the border in 2021 so far.

Shortly after Abbott’s announcement, the Texas governor released another statement saying that the Biden administration had ordered the crossings to remain open. Abbott said that Department of Public Safety and National Guard personnel would nevertheless remain on the scene to deter crossings.