Home / WORLD / Black US soldier sues police after being pepper-sprayed, held at gunpoint during traffic stop as VIDEO of incident sparks outrage

Black US soldier sues police after being pepper-sprayed, held at gunpoint during traffic stop as VIDEO of incident sparks outrage 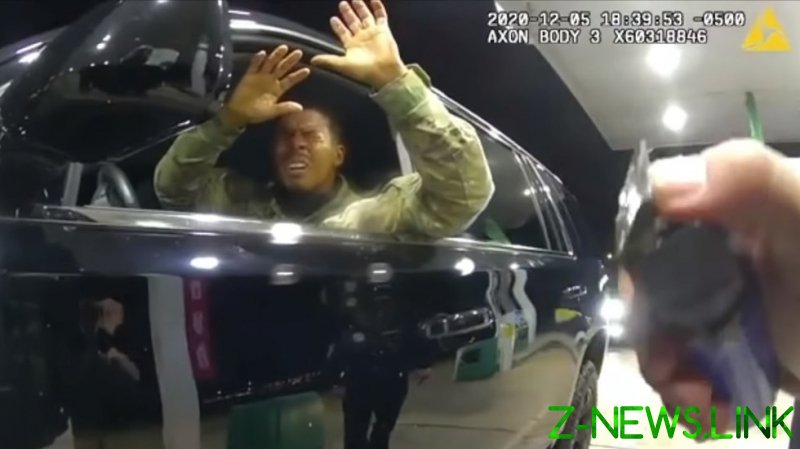 In a December 2020 bodycam video, which went viral after appearing online this week, officers Joe Gutierrez and Daniel Crocker could be heard ordering US Army Medical Corps Second Lieutenant Caron Nazario to leave his SUV over 40 times.

Nazario, however, did not comply and instead asked the officers what he was being stopped for and protested, “I’m actively serving this country and this is how you’re going to treat me?” After claiming he was “afraid to get out” of his vehicle, one of the officers responded, “You should be, get out.”

After he refused the order, one of the officers then sprayed Nazario in the face with pepper spray several times before telling him, “You made this way more difficult than it had to be if you’d just complied. Get out of the car!”

Nazario eventually complied with the order, but then refused to get on the ground, instead asking the officers what was going on. The officers could then be seen trying to get Nazario on the ground as he resisted and tearily called the situation “f*cked up.”

Nazario is suing the two officers for allegedly violating his Constitutional rights, claiming he was racially profiled during the traffic stop, and referenced the words used by one of the officers – in particular the accusation that he was “fixin’ to ride the lightning,” which is reportedly a reference to execution by the electric chair.

The police, however, reportedly stopped Nazario for having no rear license plates on the vehicle, though Nazario had a temporary license plate “taped to the inside of his rear window,” according to Vice News.

They also accused Nazario of “eluding” them, as he spent just under two minutes driving to a gas station before stopping, and also complained about the vehicle’s tinted windows.

Gutierrez – a military veteran himself – claimed in his police report that he did not charge Nazario because he didn’t want to ruin his career over an “erroneous decision,” but Nazario’s lawsuit claims he was told to “chill and let this go” following the incident or face charges.

As the video went public, many on social media scrambled to criticize the officers’ behavior, calling it “disgusting,” “un-American,” and “abusive,” and demanding that the two policemen be fired.