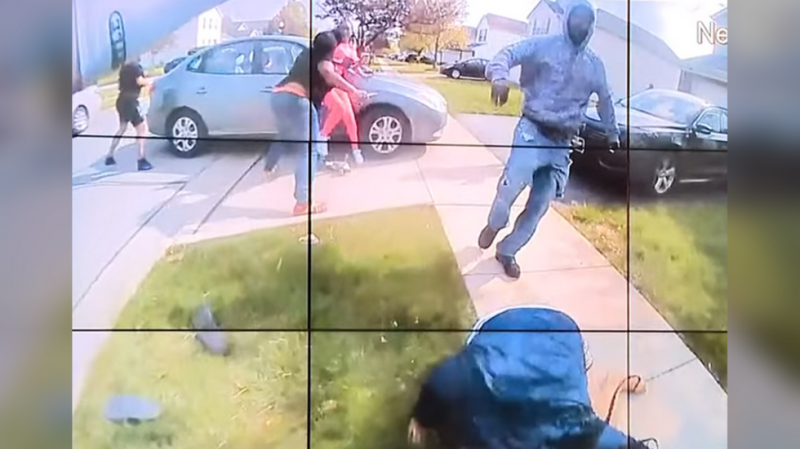 At a press conference on Tuesday evening, Interim Columbus Police Chief Michael Woods played back around two minutes of footage from the encounter. The video begins in the middle of a physical confrontation between several people. Amid the scuffle, an officer who has not been identified is heard telling others at the scene to “get down” before opening fire on a female who can be seen pushing another woman wearing a pink tracksuit against a parked car while brandishing a knife at her.

“This is a tragic incident for all involved but especially for the family of the female,” Woods said, adding that police would not confirm the victim’s identity until they were sure her family was notified of what happened.

She has since been identified as Ma’Khia Bryant, 16, by her mother, Paula.

While police said officers responded to calls about a person brandishing a weapon and attacking others, the teen’s aunt, Hazel, told reporters that Bryant herself made the call and was merely trying to defend herself from a group of women who allegedly accosted her at her foster home, where the shooting took place on Tuesday afternoon.

Before the showdown with the pink-clad woman, Bryant appeared to have attempted to stab another female. Footage shows the latter falling to the ground as Bryant rushes towards her. As Bryant turns her attention away from the woman, a man apparently comes to help Bryant and kicks the other female.

Speaking at the press conference, Columbus Mayor Andrew Ginther said the officer intervened to protect the woman who Bryant appeared to be assaulting.

“We know based on this footage the officer took action to protect another young girl in our community,” he said.

Woods noted that while the department doesn’t typically offer information to the public at such an early stage, he stressed the need for transparency, likely with weeks of nationwide tension over the murder trial of ex-Minneapolis cop Derek Chauvin in mind. Moments after the shooting in Columbus on Tuesday, Chauvin was found guilty on three counts for the death of suspect George Floyd in custody last May.

The police chief added that the state Bureau of Criminal Investigation would launch a probe into the teen’s death, while the department would also carry out an internal review of the conduct of each officer present.

The teen’s killing immediately sparked protests in the city. Scores of protesters flocked to the police headquarters, chanting Bryant’s name and shouting, “she was just a kid.” Dozens of activists staged a rally at the scene on Legion Lane.