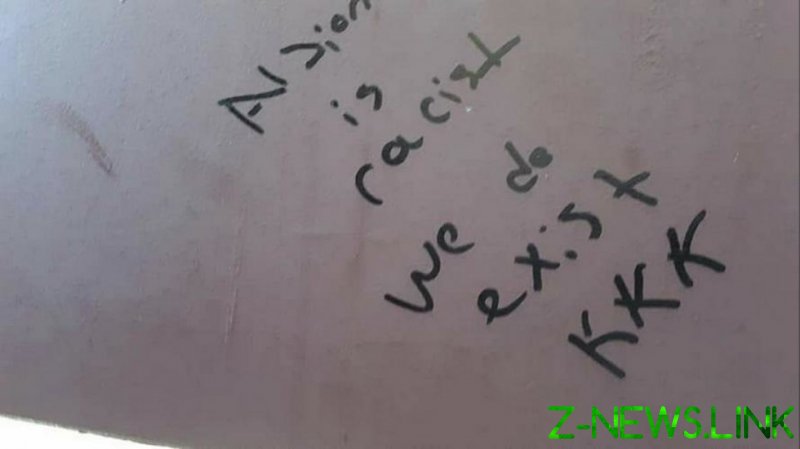 Campus authorities at Missouri’s Albion College have discovered that a 21-year-old black student was responsible for the racist and antisemitic graffiti found in a stairwell of the school’s Mitchell Towers dorm last week.

The material included “racist epithets and multiple references to the Ku Klux Klan,” according to university officials and photos shared on social media.

When the college discovered who had defaced its walls, the suspect was taken in for questioning, where he admitted to “creating most of the graffiti,” a claim that fit with surveillance camera evidence, said Campus Safety Department chief Scott Kipp. In the end, the college had to announce the culprit apparently acted alone.

The incident was largely filed away without further mention, after the unnamed individual’s release on Tuesday. The black student was placed on “temporary suspension” pending an investigation, even while the college appeared to blame his transgression on “the community.” Instead, local media pointed out that there had been “at least three other incidents in recent weeks of racial and derogatory graffiti including drawings of swastikas.” However, no images of those were published.

“We will change and heal together as a community, because we are committed to doing the work,” the school cryptically tweeted on Thursday, blaming “not…one particular person or one particular incident.” Instead, it was “a significant history of racial pain and trauma on campus” that had caused the self-confessed hate-hoaxer to go astray.

Despite the revelation that the graffiti was fake, a mass of students nevertheless took to the streets over the weekend, saying they didn’t “feel safe on campus over recent racial incidents.”

According to conservative journalist Andy Ngo, the Albion student in question had also called for a “White Lives Matter Rally” to “kill all n****rs on this campus.”

The individual at Albion is facing the student judicial process, after which the findings will be turned over to the Calhoun County Prosecutor’s Office, the school revealed. While no motivation has yet been named, the campus did announce a $1,000 reward for information on who was behind the (3 acts of) racist graffiti in the past. Students also threatened to file a civil rights discriminatory lawsuit, having been inspired by the helping hand of “some Albion College Board of Trustees members.”

Several comments on social media referred to the college population’s grand duping as “Smolletting,” after Jussie Smollett, the actor who claimed in January 2019 he was nearly ‘lynched’ by two white men who poured bleach on him and yelled slurs.

After receiving a huge outpouring of sympathy, it emerged that Smollett’s “two big white men” who’d assaulted him were actually two Nigerian brothers he had previously worked with. As in Smollett’s case, when some of his most vocal supporters were presented with the opportunity to eat their words, many chose not to, instead insisting on digging their hole still deeper by pointing out that “similar incidents” were common.