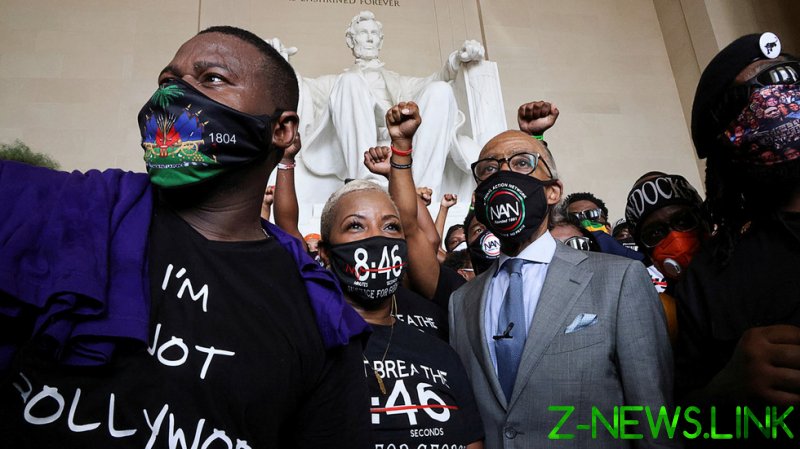 Speakers at the Commitment March on Friday delivered spirited condemnations of racism, demanded justice for the victims of police violence, and reminded attendees to vote Democrat – especially that last one.

Subtitled “Get Your Knee Off Our Necks,” the protest was organized by civil rights activist Rev. Al Sharpton’s National Action Network with Martin Luther King III, the oldest son of civil rights legend Martin Luther King Jr. The date was deliberately chosen to coincide with the 57th anniversary of MLK Jr.’s historic March on Washington.

The marchers were holding court on “racism in America,” Jacob Blake Sr. – father of the Kenosha, Wisconsin man shot by police on Sunday – declared during his speech to the crowd assembled at the Lincoln Memorial, delivering a verdict of “guilty, guilty, guilty.”

Others called for investments in historically black colleges and universities and funding of children’s programs, or demanded reparations.

Many of the assembled speakers referenced the original March on Washington, the civil rights era, and King’s work. The two-minute timeframe didn’t leave room for great profundities – “We are Black with a capital B!” Rep. Ayanna Pressley (D-Massachusetts) shouted.

But among the scattered reminders that “black lives matter” and chants of “no justice, no peace,” the political current in the air was difficult to ignore. The Rev. Jamal Bryant read a quote from Underground Railroad heroine Harriet Tubman, whose abolitionist network smuggled numerous enslaved black Americans to safety in the antebellum era: “I freed thousands of slaves, but I would have freed hundreds more had they known they were slaves.”

“I only thought about that when I saw the slaves on TV this week endorsing Donald Trump,” Bryant declared in a sermon-like cadence to cheers from the assembled marchers, before lecturing them about the need to support vice presidential candidate Kamala Harris.

“Don’t tell me about what she did in the past and not talk about what she wants to do in America in the future!” he scolded, implying Harris’ previous “tough on crime” stance, which helped put thousands of black Californians in jail, should not be held against her come November.

“Vote like your life depends on it,” Black Girls Ride founder Portia Taylor urged marchers, a sentiment most of the speakers echoed at some point in their talks.

“This will be a mockery if we do not deliver ourselves to the polls,” Rev. Franklyn Richardson, a pastor from Mount Vernon, New York, warned the crowd. “Our forefathers and mothers will turn over in their graves if we fail to deliver in this moment.”