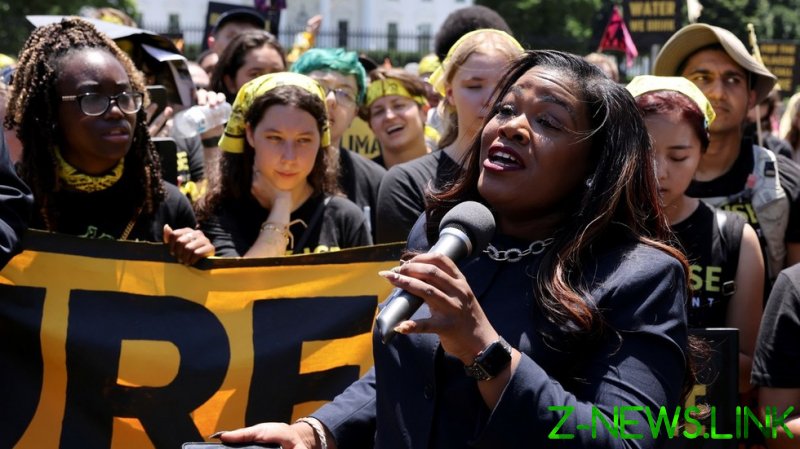 “When they say that the 4th of July is about American freedom, remember this: The freedom they’re referring to is for white people,” Bush said Sunday on Twitter. “This land is stolen land, and black people still aren’t free.”

Bush didn’t specify who “they” are, and as some Twitter users pointed out, she appeared to miss the point of what Independence Day celebrates – independence from the British empire, not individual freedom. But the bigger reaction was to the substance of her arguments.

Many observers pointed out that as a highly compensated black congresswoman who is allowed to speak out against America without fear of retribution, the 44-year-old Bush is a walking contradiction of her argument that blacks aren’t free.

“Your district hasn’t had a white representative in over 50 years,” Michigan congressional candidate Travis Wines tweeted. “You, a black woman, went from being a nurse to being elected to one of the highest offices in the country. How much more freedom are you looking for?”

In fact, Bush’s congressional seat representing Missouri District No. 1 has been occupied by black Democrats since 1969. A Republican hasn’t represented the district since 1949.

“If white supremacy was really running the show, you wouldn’t be allowed to post this, much less as a congresswoman,” said Kyle Hooten, formerly a speechwriter in ex-President Donald Trump’s administration.

Other observers, such as journalist Kyle Becker, pointed out examples of black Americans who have worked hard to take advantage of their freedoms and achieve great success, including former President Barack Obama, Vice President Kamala Harris and Supreme Court Justice Clarence Thomas.

Still other commenters argued that Bush’s comments reflect Democrats’ hatred of America. “Singlehandedly, Cori Bush has dishonored every black person who ever fought for this nation, sprinkled a little Marxism into the mix and lied about the history of America,” California congressional candidate Buzz Patterson said. “Well done, Democrats. Well done.”

Bush joined the leftist “Squad” wing of the Democratic Party, led by Representative Alexandria Ocasio-Cortez (D-New York), with her election to Congress last November. Like other Squad members, she has made controversial statements on issues such as race and criminal justice, and she was targeted for criticism after advocating defunding of police departments while hiring private security for herself at taxpayer expense.

The freshman congresswoman also has been on the cutting edge of wokeness, referring to mothers as “birthing people” while testifying to a House committee in May. After the House last month passed a bill making Juneteenth a national holiday, celebrating the end of slavery in America, Bush demanded that the nation also pay reparations to black people, end police violence, end “housing and education apartheid” and “teach the truth about white supremacy in our country.”

One Twitter user suggested that with her district, which includes St. Louis, suffering from America’s highest murder rate, defunding police and denouncing America might be the wrong approach. “I think you have other things to focus on,” he said.

Another freshman squad member, Representative Jamaal Bowman (D-New York), appeared to take a different approach to critiquing Independence Day. “Black people were not freed in 1776,” he said. “Despite a system stacked against us, we must continue to use our collective power to change that system.”

Other Twitter users picked apart Bush’s assertion that America is stolen land, including some who pointed out the hypocrisy of professing such a belief while serving as an elected official for such a nation. “How do you accept belonging to the government of a stolen nation?” one observer asked. “That makes you what, exactly? The voice of thieves? The head of theft?”