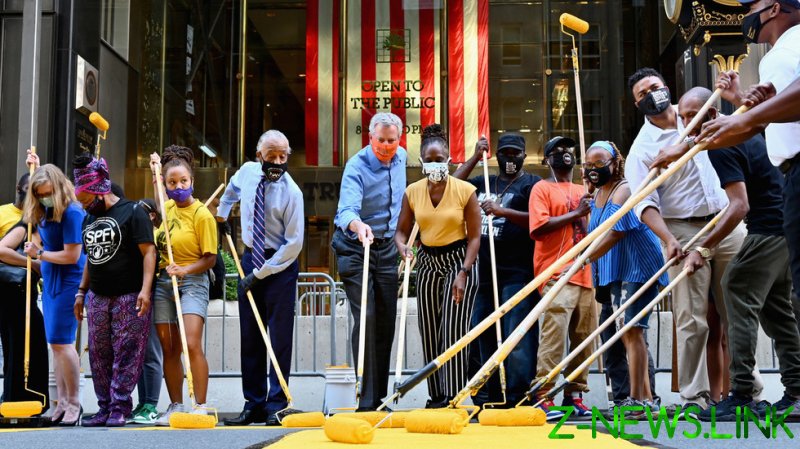 The group had hoped to paint “Engaging, Inspiring and Empowering Women to Make a Difference!” along Fifth Avenue near Trump Tower, where Mayor Bill de Blasio had arranged for “Black Lives Matter” to be painted during the summer, in a profoundly unsubtle jab at then-president Donald Trump. But the group was open to other possibilities, including City Hall Park, 42nd Street near Times Square, and a section of the FDR Drive near the mayor’s Gracie Mansion home. When their application was rejected in July, they sued – and the process has dragged on since then.

However, a federal judge in Manhattan ruled in favor of de Blasio on Thursday, declaring that he and his Department of Transportation had not violated Women for America First’s free-speech rights when they refused to issue a permit allowing the mural to be painted. City streets, US District Judge Lorna Schofield wrote in her ruling, were not “message boards for private expression,” but subject to “reasonable, viewpoint-neutral restrictions.”

The judge refused to bar the city from further decorating the streets with its sentiments, either, insisting such a ban would pose “serious, potentially unwarranted limitations on government communications with the public.” Such communications, apparently, can only go one way.

It’s not clear what the ruling reveals about de Blasio’s BLM mural, which was slopped down with much fanfare on July 9 – first outside Trump Tower and later in Brooklyn, Harlem, and Staten Island. Is it city policy now that Black Lives Matter? De Blasio claimed the slogan rose above politics, but while the sentiment itself is uncontroversial enough stripped of its political baggage, the meaning it has developed over a summer of violence and race-baiting is quite the opposite. At any rate, de Blasio didn’t poll the city to get a sense of popular opinion before splashing down all that paint in his anti-Trump temper tantrum.

Was the mayor trying to make up for his woeful inability to rein in an abusive (and yes, racist) police force while acknowledging his failure to coherently punish the spoiled rich-kid rioters who have repeatedly made a mess of the city and given those peacefully protesting for black lives a bad name? De Blasio is a rare unifying figure for the Left and the Right, which both loathe him.

New Yorkers had a lot of time over the summer to sit and brood over their mayor’s embrace of BLM, since it was the only social event allowed to take place all season long. De Blasio essentially declared the group Covid-19 kryptonite, and one suspects a lot of New Yorkers who had never cared previously about racism in the justice system suddenly found it within themselves to care, just to get out of their apartments. Those who did so learned a valuable lesson – not about racism, but about political favoritism – watching the seething crowds breathing on each other with the approval of the mayor’s office.

De Blasio’s administration initially denied Women for America First the permit they needed to paint the mural less than a month after the original mural appeared in front of Trump Tower. And while the pro-Trump group’s application was indeed a political stunt, it was a tasteful one, as much as such things can be tasteful – with a truly innocuous message unlikely to cause offense to anyone (if there can be said to be an anti-female-empowerment lobby operating in NYC, it’s not a very muscular one).

His move to deny the permit was, then, merely a show of force. Emasculated by Governor Cuomo up in Albany, who was stealing all the glory (and, somehow, sympathy) as New York was being clobbered with Covid-19, thanks in no small part to the governor’s own policies, de Blasio seized what little power was available to him – the power to say “no” to this group of Trump-loving women, many of whom hailed from NYC and were suffering under the mayor’s incompetence right along with the cabin-fever-crazed New Yorkers marching in the streets. Instead of admitting to his own political favoritism, he doubled down on his obsession with BLM, appointing cops to guard the mural while the crime rate in the city rocketed up.

It might at first seem that the struggle over Women for America First’s permit application has grown stale and pointless in the six months since they filed their lawsuit. With Trump gone from the White House and de Blasio on his way out of Gracie Mansion, surely there are bigger issues on the table for NYC. But not only has life in the city not improved under his incompetent leadership, but a growing faction of the Democratic Party has taken aim at the same First Amendment he so flippantly slapped down, threatening congressional colleagues for believing in “conspiracy theories,” working for Trump, protesting, and other actions once protected under the umbrella of “free speech.”

Women for America First may have accused de Blasio back in July of failing to “guarantee all Equal Protection under the Constitution,” but his party seems to have taken that as a challenge. The rest of the country should think twice about following in de Blasio’s footsteps – unless they want to unite both parties against them, that is.