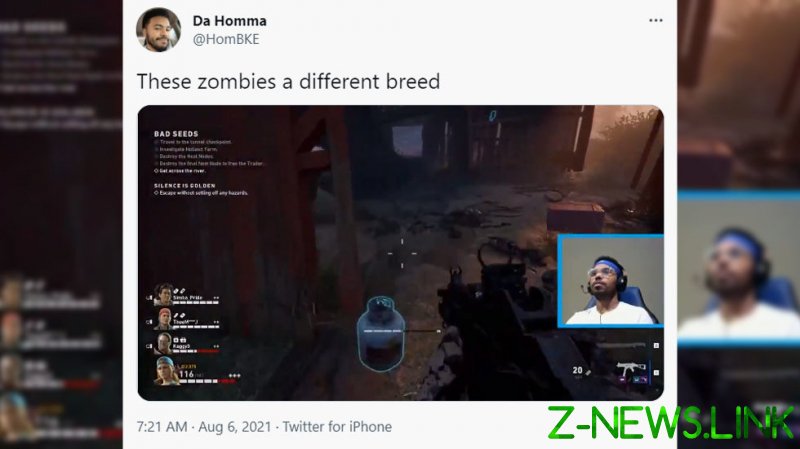 Shortly after beta testing for Back 4 Blood opened to the public this week, gamers noticed that one of the screams from zombie enemies sounded similar to the ‘N-word’ racial slur.

“What did you call me?” questioned one black gamer in a viral video, after a zombie ran at his character and made the scream sound effect in question. Another gamer also went viral after he expressed his shock at hearing the sound in the game.

The debate blew up further after gaming news outlet Kotaku weighed in on the “unfortunate” zombie scream.

“I feel safe assuming the folks making this game didn’t intentionally record or include a sound clip of a zombie yelling out a slur,” wrote Kotaku editor Zack Zwiezen. “But the clip sounds so similar to the word that, this early on, before the game is released, it might not be a bad idea to change or remove it from the game altogether.”

Zwiezen’s suggestion that the sound be removed upset many fans, who accused him and others of attempting to make controversy out of nothing.

“They know damn well the damage they could do to a game/studio by pursuing this baseless narrative, but they do it anyway because it generates attention: the one thing they’re desperate for,” claimed one social media user, while another wrote, “I listened and they’re clearly not saying it.”

Others on social media, however, argued that the zombie “definitely” said the n-word.

“Listen. I’ve been doing VO for 20-plus years and I just don’t see how that is left in the game in 2021 if not on purpose,” tweeted black actor Gary L. Gray. “Whether it be straight from the actor or post production, that has been edited to sound like that. There are people that signed off on that.”

Back 4 Blood development company Turtle Rock has not yet commented on the situation.