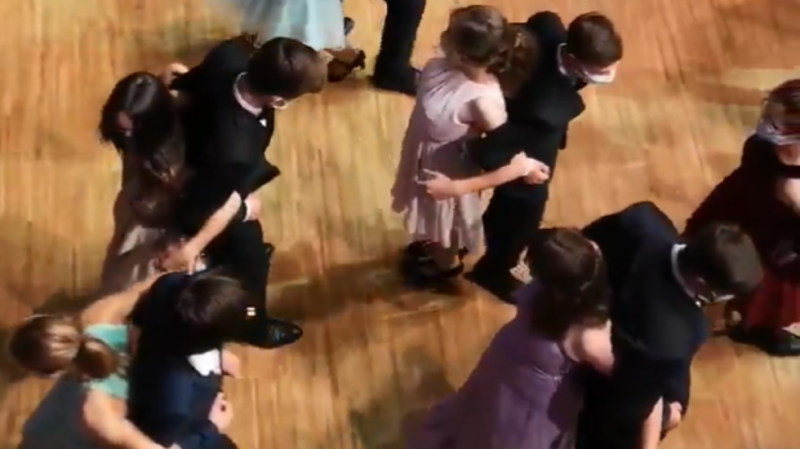 The video showed formally dressed students locking arms with their partners from behind as they danced with their backs facing each other in waltz-like steps. While it is unclear where and when the clip was recorded, some alleged it was filmed during a classical dancing class, possibly in the Czech Republic as a joke to mock new Covid-19 restrictions imposed by the Czech government under new Health Minister Roman Prymula.

The Czech language can be heard on the video, and such classes with performances to show their progress are common in the country.

But regardless of whether it was serious or satire, the scene struck a nerve on Twitter, where commenters saw it as a sign of the draconian times as governments around the world impose mask mandates and other social-distancing rules amid the pandemic.

A Twitter user with the account name BeachMilk, who posted the video, said, “Society has entered self-destruction mode.” One observer tweeted, “When the historians write this period, it will be a subject of incredible amazement and scorn.” Another said, “All they lack is a toe-tag,” while journalist Cory Morningstar lamented, saying, “Desperately, desperately, desperately sad.”

Other Twitter users saw the back-to-back dancing as part of a trend toward purposely ludicrous rules that have no real public health benefit as a method of seizing more control over people. “We are being punked as a species,” one commenter said. “And it is on every single person who accepts this crap.” Another observer tweeted, “They’ll be playing this at Bilderberg, Davos, etc., laughing while the rest of us cry.”

Satirical or not, it would be easy to mistake the backward dance for 2020 reality, where pictures of young musicians playing their woodwind and brass instruments through mouth holes in their masks have become a meme, while Amazon is selling 6ft social distancing sticks. As one commenter on the dance video said, “We have now entered full Orwell. There is no coming back.”