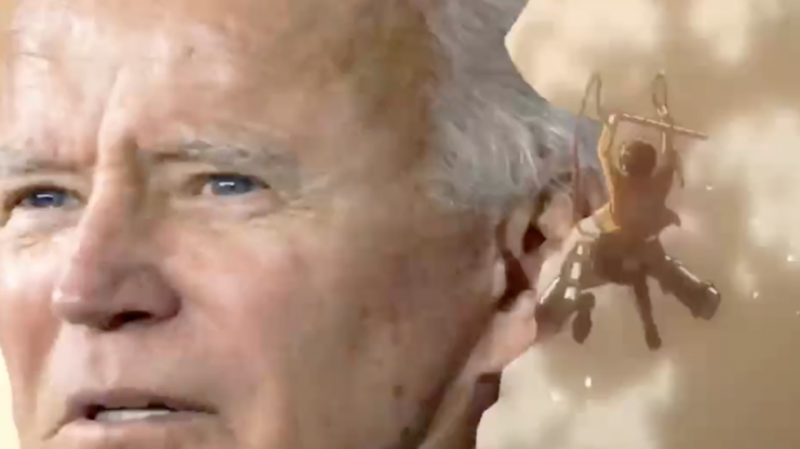 “Any anime fans out there?” Gosar tweeted on Sunday night, along with his video.

The clip features footage from the Japanese anime’s opening. The ‘Titan’ story focuses on people fighting against threatening ‘titans’. While bits of the opening credits play, images of immigrants and Border Patrol are spliced in, along with text in Japanese reading, “attack of immigrants.”

The bits of the video that got the most attention, however, featured Democrats, such as the president and Rep. Alexandria Ocasio-Cortez (D-New York), both of whom have their heads superimposed onto monsters being attacked by Gosar, who is in place of the character Eren Yeager. Gosar at one point slices a giant AOC’s neck, and then later rushes at a giant Biden head with two swords.

‘Attack on Titan’ is an anime that has been used by conservatives before, often photoshopping Trump and his political enemies into the footage, as it includes David and Goliath-themed imagery, as well as characters defending a city’s walls.

Gosar’s video left many confused nonetheless, with some critics going so far that they accused the Arizona Republican of encouraging violence against the president with the video, which has been viewed almost two million times as of this article’s publication.

Fans of the actual anime found it hard to believe Gosar and other Republicans photoshopped into the video – including Reps. Marjorie Taylor Greene (R-Georgia) and Lauren Boebert (R-Colorado) – are actual fans of ‘Titan’.