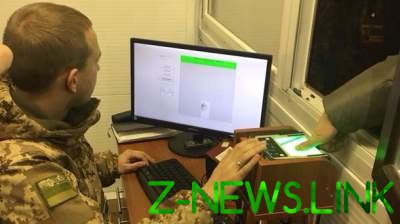 Under the new system he has designed more than 2,700 people.

As is known, the biometric control system deployed the State border guard service of Ukraine pursuant to the Decree of the President of Ukraine of August 30, 2017 No. 256 “On the decision of the Council of national security and defense of Ukraine of July 10, 2017 “On strengthening the control of entry to Ukraine, departure from Ukraine of foreigners and persons without citizenship, their compliance with the rules of stay on the territory of Ukraine”. She is one of the subsystems of the departmental automated border control.

As reports a press-service gpsu, during the passport control inspectors of the state border service carry out verification of passport documents of foreigners, including databases of Interpol. Next, the read information (fingerprints) with the help of readers that goes to the subsystem of processing of biometric data of the Department. In addition, an interagency information and telecommunication system “Arkan”, it goes to the National system of biometric verification and identification of citizens of Ukraine, foreigners and persons without citizenship of the State migration service.

To create this system was technically retrofitted with 157 points and 3 KPVV on adminpraise HERE are the Crimea. Equipped more than 1,200 jobs and completed more than 400 workstations with fingerprint scanners, deployed more than 320 new jobs in the I-th and II-th control line and more than 420 at railway crossings, upgraded vault storage biometric data.

See also: it Became known how many Ukrainians received the status of refugee in Poland

“Since the beginning of the present day locking system biometric data of foreigners and persons without citizenship by the border guards have issued more than 2,700 people, about 500 of them – citizens of Russia”, – noted in state frontier service.