Home / WORLD / Bin Laden backs Trump for another term! The Al-Qaeda leader’s niece endorses his re-election, but it will just boost Biden

Bin Laden backs Trump for another term! The Al-Qaeda leader’s niece endorses his re-election, but it will just boost Biden 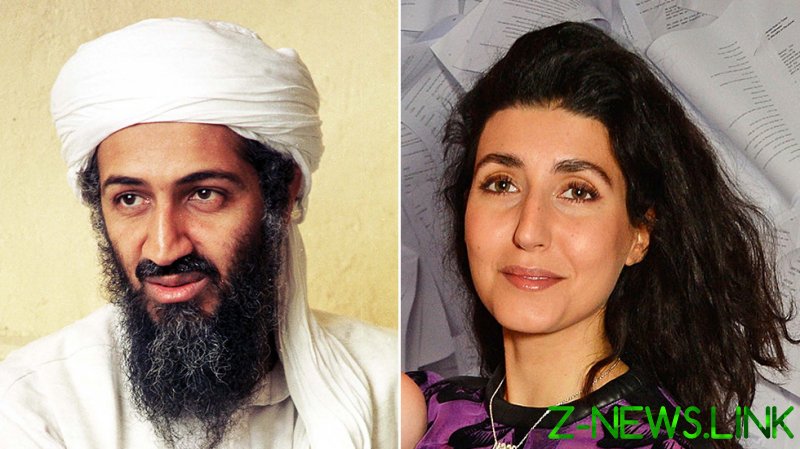 As political endorsements go, this one takes some believing. A member of the Bin Laden family giving their wholehearted backing to the staunchest of Republicans.

It came from Osama’s niece Noor, who’s backed Donald Trump to prevent another 9/11, which of course her uncle masterminded from the caves of Afghanistan exactly 19 years ago this week. Her reason for breaking cover from her home in Switzerland is unclear, but it wouldn’t be a stretch to imagine she has an eye on capitalising on the celebrity of her name.

Maybe turning herself into the political equivalent of Kim Kardashian.

For the record, Noor’s branch of the family spell their surname Bin Ladin (her father and Osama were half-brothers).

When 9/11 happened, Noor was 14 years old, but she has opted to retro-engineer her uncle’s strategy. After his death, it was claimed the Al-Qaeda leader wanted to assassinate Barack Obama. Subsequent reports stated he was of the opinion that “Biden is totally unprepared for that post, which will lead the US into a crisis.”

There’s certainly some who will say, who cares what Noor thinks? She’s a wannabe salivating at the chance of any attention from the world’s media, even posing in a Trump onesie – although a lot of the mainstream outlets have ignored her comments.

That aside, Noor hasn’t got her uncle’s grasp of optics and how to manipulate situations.

Her endorsement continued: “I have been a supporter of President Trump since he announced he was running in the early days in 2015. I have watched from afar and I admire this man’s resolve.

“He must be reelected … It’s vital for the future of not only America, but Western civilization as a whole.”

Trump hasn’t yet reacted to Noor’s ringing approval. That’s because her name is toxic with his base, whatever the spelling.

The second-amendment warriors don’t want their poster boy being cheered by on the niece of the man who orchestrated the biggest terrorist attack their country has ever seen.

Osama reduced one of America’s most potent status symbols – New York’s Twin Towers – to a pile of rubble. He made a lot of people in the world’s most powerful country fear for their lives.

Granted, Trump has stuck to his anti-war message, has brought some troops home from Iraq and has not begun any military conflicts, but he knows he can’t ‘break bread’ with a Bin Laden.

If anything, it’s only going to alienate those who’re contemplating voting for Trump.

Not only does Noor carry the name, she also comes with all the trappings it brings. The Bin Ladens are a supremely wealthy family, as the patriarch Mohammed turned himself from a porter into a billionaire by securing close ties with Saudi Arabia’s royal family.

When Noor’s parents divorced, the assets being divided up were in the hundreds of millions. Her father Yeslam is the chairman of the Geneva-based Saudi Investment Company, which looks after the family’s worldwide investments.

Her mother admits to living a life of privilege, and also met Osama a few times.

So Noor’s contributions are not coming from a place of struggle or authenticity.

A rich outsider airing their views won’t help Trump, and that’s even without her name.

And even if one plays devil’s advocate and takes her words at face value, they fall flat. Trump has done nothing to engender unity and calm anti-American sentiment in the Middle East.

He was the instigator behind the American embassy in Israel being relocated to Jerusalem, a slap in the face to many Muslims.

He also unveiled his Peace to Prosperity plan, which essentially entailed Israel getting what it wanted and Palestine having to smile politely as they handed their land over.

And while he’s been nominated for the Nobel Peace Prize for his “work” in opening up diplomatic channels between the UAE and Israel, that has also gone down like a lead balloon with scores of Muslims.

They feel the UAE has sold out, in exchange for earning brownie points with Trump and gaining access to American fighter jets.

Trump couldn’t be closer to the crown princes of both Saudi Arabia and the UAE, the de-facto rulers of both states.

If anything, his use of soft power and allegiances only fuel anti-American sentiment, which will likely bubble up at some point.

Not that he’s alone in that.

During his eight years in the White House, Barack Obama rained down a torrent of drones on Muslim countries, resulting in the death of many innocent lives. He oversaw the killing of Osama, who was never tried in a court of law, but gunned down and then buried at sea – with the Americans having to fly into Pakistan to get him, without permission.

American politics and its meddling in the Middle East needs a complete reset to prevent the possibility of another 9/11. Biden and Trump won’t do that, and nor, it seems, will anyone else on the horizon. So Noor is wrong in her judgement. In fact, she can only do damage to Trump and chip away at his image by putting her name alongside his.

The Democrats are the only ones wishing she keeps talking. If she does, she might just make her uncle’s final wishes come to life and help President Biden move into the White House.