Home / WORLD / Billions from Biden: Ukraine expects a lump sum from US taxpayers this week but, after Afghanistan, the timing couldn’t be worse

Billions from Biden: Ukraine expects a lump sum from US taxpayers this week but, after Afghanistan, the timing couldn’t be worse 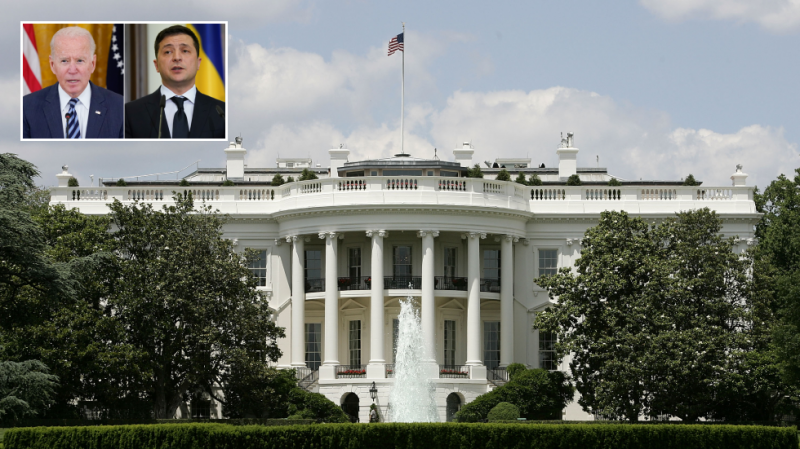 The meeting, however, comes at the worst possible time. And it isn’t even really Ukraine’s fault. As even the staunchly pro-Maidan American-run media there have to admit, the mix of oligarchy, corruption and erosion of democracy has become embedded in the East European country.

Eyeing re-election, Zelensky is clamping down on independent media, in the spirit of his predecessor, oligarch Petro Poroshenko, and is clearly abusing the law to go after rivals. Opposition leader Viktor Medvedchuk, who advocates repairing relations with Moscow, is facing charges of high treason. He, of course, also happens to be very, very rich.

Obviously, in Ukraine’s case, such behavior comes with a thick and sticky ‘national-security’ coating. Equally obviously, most Western experts are just fine with swallowing that, because Cold War Re-Enactors can never get enough of that old, tired script: a leader might be a “son of a b**ch,” but if he is our “son of a b**ch,” we’ll turn a blind eye. Or worse, keep applauding and paying.

So far, so bad. But again, just business as usual. With regard to the US, though, things are off the rails to an unusual extent. Biden himself has had a torrid time in recent weeks trying to shake off the impression, given by his domestic opponents, that he is senescent, cowering behind a podium and napping on camera.

His demeanor is, in a way, understandable because he is plainly responsible for the chaos in Afghanistan, in what is probably the worst and most shameful rout abroad in American history, up until now at least. Never mind the comparatively small number of (American) casualties during the run from Kabul, nothing has made the empire’s legions and their leaders look worse for decades.

It is true that Biden, in essence, merely chose to execute an insanely naïve (or brutally cynical) policy laid down by his unstable predecessor Donald Trump. But since the new president could well have chosen to take a different course, we are looking at a true piece of bipartisanship in action. The Great American Rout of Afghanistan is what so many American commentators and politicians can’t get enough of asking for: a common, across-the-aisle achievement. Everyone now slow-clap everyone else, please.

The scenes of apoplexy, shame and finger-pointing will be there to greet the relative newcomer from Kiev when he touches down in his patrons’ capital. His advisers, it seems, have big hopes, going public with their demands for “tens of billions” of dollars in support ahead of the meeting. Why not just ask for hundreds of billions, and be done with it?

This must go down incredibly well in Washington, especially in view of the fact that Biden has bad personal memories (perhaps) of what Ukrainian graft can do to one’s family’s reputation. Moreover post-2014 Ukraine has not made good progress on fighting that corruption at all.

Such silly demands must also highlight the Ukrainian elite’s sense of timing and, in general, professionalism to their most important sponsors. Especially if the same, clearly comedically gifted adviser comes up with the immortally dry line that it “would be logical to give Ukraine the same level of military and financial support that Afghanistan was receiving since it’s a viable state willing to fight and has liberal democratic values.”

But there it is. Once you adopt a client country you hardly understand, just because [US diplomat] Victoria Nuland was bored and sensed a target of opportunity,

Tim Snyder was high on the West’s “universalism,” and Barack Obama refused to stick to a deal already made with Russia, you get stuck with a lot of unknown unknowns.

Yet amateurish advisers who don’t even have the savvy to hide their carelessness are a dime a dozen (and don’t they know on the Potomac!). There are other, more substantial issues, of course. Ukraine’s elite, in short, is afraid. Kabul must have been a wake-up call for even the drowsiest or most delusional fans of outsourcing national security to the USA.

For countries such as Germany or France, that’s a problem, but – for now – one that they can still, falsely, pretend is not urgent. For the Baltics or Poland, it’s already much less comfortable. For Ukraine, it’s a nightmare – dependent on America for its military and, ultimately, economic survival, in a conflict with separatists, facing off against Russia, and not even in NATO. No wonder that a close Zelensky adviser also feels what looks like an almost Freudian need to insist that Ukraine is not Afghanistan.

Some Ukraine cheerleaders with a clearly challenged sense of proportion are even desperately trying to make hay of America’s Kabul fiasco by goading Biden to compensate for it by supporting Ukraine all the more. Good luck with that.

No wonder also that Zelensky’s wish list includes a NATO Membership Action Plan (MAP). Yet in an intervention that is hardly a private opinion, the former US ambassador to Ukraine Steven Pifer has used the Kyiv Post, often the mouthpiece of Ukraine’s Western diaspora lobby, to pour cold water on just these hopes. Zelensky should not even ask for a MAP, he said, because it’s a non-starter anyhow, with too many NATO members understandably skeptical.

And Pifer makes sure not to sugarcoat his bitter pill. Instead he adds some more bitterness: Ukraine, he recommends sagely, should not ask any more for help blocking the Nord Stream 2 pipeline either. As with his advice on NATO, Pifer is only being realistic here. Yes, time to let go of that battle and try to make the best of the defeat inflicted by the American-German agreement on the new gas pipeline’s future usage, he reasons.

Pifer’s pointed, well-timed, word of advice can be summed up in Mafia-ese: “Nice wish list you have there, Volodymyr. Would be a shame if anything happened to it in Washington. Better just leave it at home.” So, it seems that Washington is not ready to escalate its support for Ukraine. Pifer’s job is to try to reduce the embarrassment by dampening Ukrainian hopes in advance and signaling to Zelensky to play nice and not ask for too much.

So what can Zelensky, perhaps, expect to get? Apart from words, presumably, (some) money. But certainly not the reckless sums bandied about by advisers on a fantasy trip, not “tens of billions.” And no, the US elite is not so soft-hearted that it will feel a moral obligation to compensate for the Russian gas transit fees Ukraine might lose because of Nord Stream 2.

What will probably happen is US pressure on Germany to loosen some purse strings, again, especially since Merkel has, in essence, agreed to do just that. How successful such pressure will be remains to be seen. Germany as well may be reluctant. Consider that the –perhaps– most hopeful candidate for the chancellor’s office is now Olaf Scholz, a fiscal hawk who has already ruled out tax relief for Germans – while campaigning. That’s not the style of a country eager to spend abroad.

Another thing, Zelensky may want to prepare himself for are, again, words, but possibly unkind ones. In a way, his visit could be an opportunity for Biden to demonstrate his usual obstinacy and ill-tempered crankiness. And that would mean to give Ukraine’s president a telling-off so as to show the American public that, despite his Kabul calamity, this president will “stay the course” and disengage with client states that do not deliver on reform and instead keep milking the US.

There is a limit to how far such a harsh scenario could unfold, of course. America cannot be seen to prepare another geopolitical rout. But it is intriguing to note even habitual Ukraine boosters publicly advise the president not to cut Zelensky any slack on corruption.

Whatever his first visit to Washington will do for Ukraine and Zelensky personally, it is likely to be a mixed bag at best. But the Ukrainian leader might end up feeling grateful for a mixed bag, given that it could be a whole lot worse.