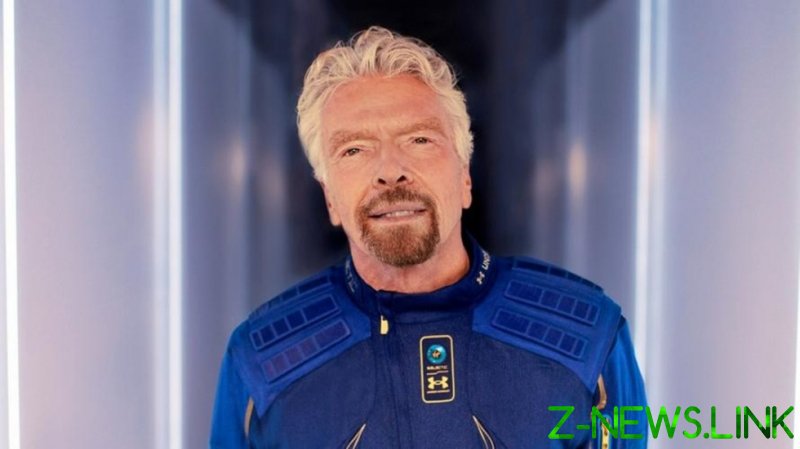 Branson himself will be on board Virgin Galactic’s fourth test flight as ‘Astronaut 001,’ with the job of “evaluating customer spaceflight experience,” his company announced on Thursday evening. The 70-year-old Brit was originally supposed to be on the second Virgin Galactic flight, but was moved up in a public relations coup over Bezos and his Blue Origin group.

Bezos had scheduled his flight for July 20, the anniversary of the 1969 Apollo 11 landing on the moon. Earlier on Thursday, he announced that one of the passengers on board his New Shepard rocket trip would be Wally Funk, the 82-year-old aviator who trained with NASA in the 1960s but never made it to space on account of being a woman.

“No one has waited longer. It’s time,” Bezos wrote on Instagram, posting a picture with Funk. The two will be joined by Bezos’s brother Mark and a yet-unnamed passenger who paid $28 million for the privilege.

Announcing that his four-person crew will beat Bezos into space, Branson said he was “not apprehensive at all” about the launch and described it as “a dream of a lifetime.” He is supposed to celebrate his 71st birthday a week after liftoff.

He had actually teased the possibility of a billionaire space race in early June, tweeting “Watch this space” in a message congratulating Bezos for his launch plans.

Neither Virgin Galactic nor New Origins is actually going into orbit. Bezos’s ship is scheduled to reach the altitude of 106 kilometers (around 350,000 feet) – just over the Karman Line used by NASA to define the boundary of space – and parachute back to the ground after an 11-minute flight.

While both billionaires will beat SpaceX founder Elon Musk into actual space, the South African-born entrepreneur can still boast of having the only crewed Western spaceship – the Crew Dragon – capable of reaching the International Space Station in low Earth orbit.