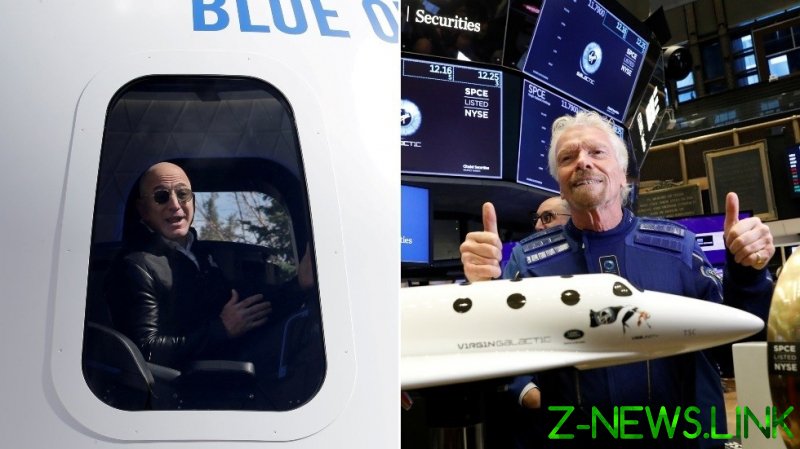 The company of former Amazon CEO Jeff Bezos tweeted a couple of infographics favorably comparing its primary craft to the one used by Virgin Galactic. “None of our astronauts have an asterisk next to their name,” Blue Origin bragged, referring to the fact that its competitor’s flight altitude only constitutes “space” by some definitions.

The tweets also highlighted features like the “largest windows in space” and the “minimal” impact on the ozone layer that Blue Origin’s working horse has.

The two billionaire-owned space enterprises purport to be commercial companies planning to make a profit on highballing space tourists. But many people see Blue Origin and Virgin Galactic as vanity projects to massage the inflated egos of Bezos and Virgin’s Richard Branson. Their public spat over who “wins” their “space race” seems to back that perception.

On July 1, Virgin Galactic announced that the first crewed flight of its VSS Unity suborbital plane would be launched in less than two weeks. The test mission will be the first to carry a full load of six people, including 70-year-old English magnate Branson. The plane has made three successful flights with only a pilot and co-pilot on board since 2018.

The crewed flight is noticeably scheduled just nine days ahead of Blue Origin’s first crewed mission, which will have 57-year-old Bezos among its passengers. The testing timetable was announced in early May, so Virgin Galactic is apparently stealing thunder from its competitor.

Unlike Virgin Galactic’s Unity, an air-launched rocket plane, Blue Origin’s New Shepard is a traditionally designed craft launched by a reusable rocket and doesn’t require a dedicated crew to pilot it. Both can carry four passengers and neither is capable of full orbital flight, which requires significantly more energy and higher acceleration. The crafts can go high enough to see the curvature of Earth and experience other unusual conditions, so the companies hope tourists will flock to book their future flights.