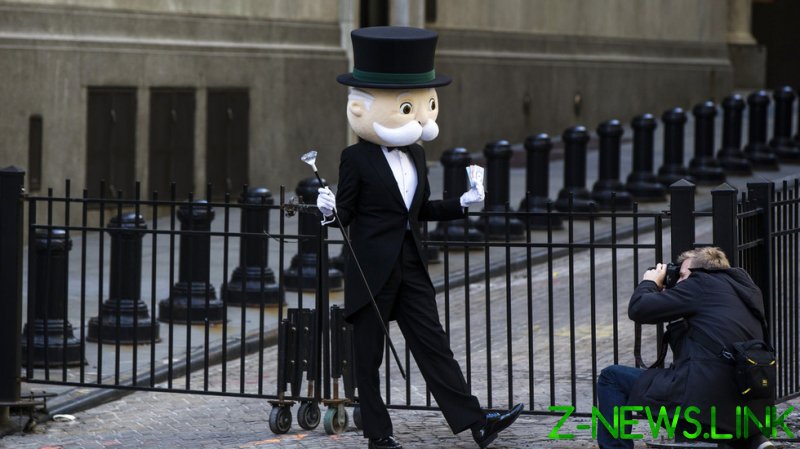 Over the last nine months, the 651 billionaires who call the US home have increased their wealth by a whopping $1.06 trillion, according to a report published Tuesday by Americans for Tax Fairness and the Institute for Policy Studies. Far from being negatively impacted by the pandemic-related economic shutdowns, the country’s super-rich seem to have thrived amid the policies that have plunged so many ordinary Americans into poverty.

The billionaires’ wealth grew so much that they could cut “every man, woman and child in the country” a $3,000 stimulus check and “still be richer than they were nine months ago,” ATF executive director Frank Clemente said in a Tuesday press release.

The report tracked the fat-cats’ profits from March 18, the approximate start date of the economic shutdowns, through December 7. The vast majority accelerated their accumulation of wealth even as ordinary Americans saw their life savings slip through their fingers, losing jobs, businesses, and loved ones to the one-two punch of the coronavirus and the political response.

After nine months of raking in the cash, the billionaires’ total wealth had soared 36 percent to over $4 trillion – nearly twice the $2.1 trillion in wealth held by the poorest 50 percent of Americans.

The monstrous cash-pile amounts to double the two-year budget gap of all state and local governments, a figure estimated to reach $500 billion thanks to the devastating effects of the economic shutdowns on tax revenues. It even approaches the massive sum the federal government spends on Medicare and Medicaid – $644 billion and $389 billion in 2019, respectively, the report claims.

While most working- and middle-class Americans received a single stimulus payment of $1,200 as part of March’s CARES Act pandemic bailout, a promised second stimulus check has failed to materialize. The expanded unemployment program that doled out $600 per week to newly-jobless Americans came to an end in July, and while President Donald Trump issued an executive order to bridge the gap with a less generous $300 weekly payment, Congress has thus far refused to pass a second Covid-19 bailout package even as the rest of the bailout programs are set to expire at the end of the year.

One of the chief beneficiaries of the fiscal explosion has been Amazon founder Jeff Bezos, whose personal fortune increased 63 percent since March as locked-down Americans turned to online shopping to meet their needs. The retail tycoon faced sharp criticism over his company’s alleged mistreatment of Amazon warehouse workers in the early days of the pandemic, but had he distributed his $71.4 billion windfall among Amazon’s employees, workers would have received $88,000 each while leaving their boss just as rich as he was before the coronavirus outbreak.

And Bezos, said to be the richest man in the US, wasn’t even the most blessed by Covid-19. That title goes to Tesla billionaire Elon Musk, whose wealth grew by an eye-popping 542 percent – from “just” $24.6 billion in March to $143 billion by December. Musk is about to get quite a bit richer, too, after his StarLink satellite company won a Federal Communications Commission auction to deliver bandwidth to hundreds of thousands of rural Americans.

Senate Democrats circulated a letter earlier this week demanding another $1,200 stimulus payment be part of the Covid-19 aid package currently being debated in Congress. The party has balked at a Republican-authored bailout proposal that would exclude individual payments and include a five-year liability shield for corporations – a measure Vermont Senator Bernie Sanders derisively dubbed a “get out of jail free card to corporations.”