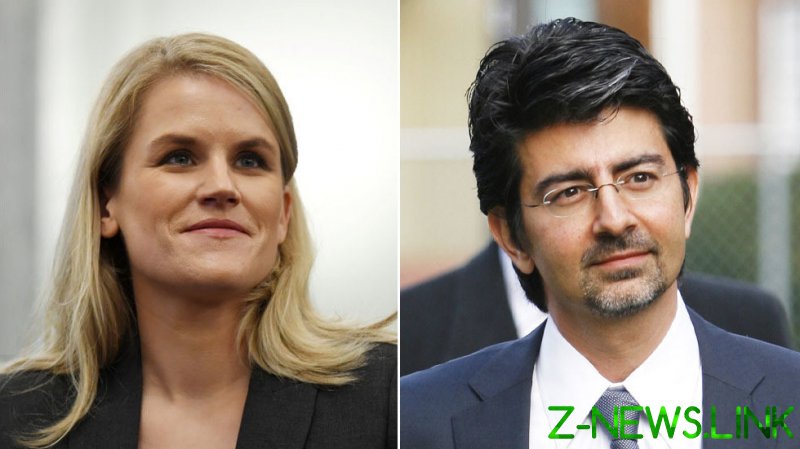 It’s been revealed by Politico that Haugen, the Facebook ‘whistleblower’ who has generated such intense mainstream attention in recent weeks, receives “behind the scenes” financial assistance from controversial US billionaire Omidyar.

The backing is extensive. Omidyar’s Luminate is handling all her press and government relations in Europe, her top public relations representative in the US is a former Obama White House spokesperson who runs public affairs for a non-profit funded by Omidyar, and last year the tech guru gifted $150,000 to Whistleblower Aid, another organization supporting Haugen.

Politico asserts that this enormous wellspring offers her “a potentially crucial boost” in her crusade against the social network giant, granting Haugen “an edge that many corporate whistleblowers lack” – but then again, she’s a far from typical whistleblower.

A Silicon Valley veteran, Haugen’s stint at Facebook’s Threat Intelligence put her in extremely close quarters with former high-ranking US intelligence officials, who occupy senior divisions in the unit. An ad for an analyst vacancy in the division, posted just days before Haugen’s well-publicized Senate testimony, cites “5+ years of experience working in intelligence [in] international geopolitical, cybersecurity, or human rights functions” as an absolute “minimum qualification” for anyone wishing to apply.

There’s no indication Haugen herself has such a background, but it’s hard to imagine two-and-a-half-years spent rubbing shoulders with CIA, NSA, and Pentagon journeymen didn’t leave an impression on her.

As such, one needn’t be a cynic to suggest her public claims that the purported exploitation of Facebook by Western state-mandated “enemy” countries, against which her former colleagues have a clear and demonstrable bias, represents a threat to US national security may have been insidiously influenced to some degree. This would, of course, necessitate greater governmental censorship and surveillance powers in respect of social media, which White House and Pentagon officials have demanded for a decade or more.

Whatever the truth of the matter, given Haugen’s public positions, it’s hardly surprising Omidyar has taken such an interest in her. The eBay founder has for many years used his vast personal fortune to sponsor anti-government media operations, activist groups and NGOs in countries targeted for regime change by Washington, often in quiet concert with CIA-front organizations the National Endowment for Democracy and USAID.

Luminate’s ‘Strategic Plan’ for 2018–2022 spells this out in not so many words. It claims that “counter forces to liberalism have gained strength,” due to “Russia’s disruptive tactics” and “China’s state-centric alternative model,” and in response, the organization pledges to “to engage in ‘Countries in Transition’ where a potential inflection point and evidence of reform leads us to believe our support could catalyse significant change in an accelerated timeframe.”

“Our goal for this work is to provide critical support to courageous individuals and organisations seeking democratic gains in settings where civil society has been suppressed and where media has been circumscribed,” it ominously states. “We also work with government reformers post-transition to achieve positive policy outcomes which benefit large populations.”

Just two examples of “critical support” doled out by Omidyar over the past decade include bankrolling groups and news platforms at the forefront of Ukraine’s 2014 Maidan coup, and financing a welter of youth radicalization initiatives in Zimbabwe via the Harare-based Magamba Cultural Activist Network. A 2016 Omidyar Network-funded report on “People-Powered Media Innovation in West Africa” made clear the destabilizing intention behind such initiatives.

In a section discussing the “challenge” of “converting passive readers to active citizens,” the report recommended sponsoring the publication of “politically opportunistic” content “tied to unfulfilled promises” in order to “motivate citizens and government to act in the public interest.” It cited “recent, major successes of citizen and media efforts” in Nigeria that demonstrated “how public energy and conversation can be further harnessed and directed.”

In one case, a local radio station partnered with an NGO to “[develop] a radio program dedicated to education issues,” which “quickly gained popularity, and a highly engaged listenership.” Within a year, the government had “implemented several overdue policy reforms,” and the radio station was said to have since “applied this strategy to other negligent government bodies.”

“With the spectre of potential citizen mobilization looming in politicians’ minds, media outlets also have the potential to elicit government response directly,” the report boasted. “In some cases… government was motivated to act in order to prevent citizen action, instead of in response to it.”

Not coincidentally, Omidyar finances several media organizations in Lagos, including the radical Sahara Reporters, which focuses on corruption in the public sector – its founder allegedly has to sneak in and out of the country as his work has made him an enemy of the state. The Nigerian government evidently has much reason to fear Omidyar, which is perhaps why there has been no high-level opposition to his effective takeover of the country’s tech sector.

Clearly, the man well understands what can be achieved when citizens are stirred to action, and how they can be. In light of this, the help afforded to Haugen by Whistleblower Aid gains a rather sinister resonance. While widely reported that this assistance is strictly legal in nature, the organization’s founder Mark Zaid has made an intriguing disclosure.

“[We] prep clients in order to be focused on how to answer questions properly,” he told Gizmodo on October 6. “We have media experts that we work with to guide folks with something as simple as, you know, where do you look when you’re talking to a camera or a host? How do you best fluidly answer a question to come across in a positive way? Everything that might be connected to ensuring the individual’s image and substance are at their best.”

This direction surely explains why Haugen’s interviews with major media outlets have been so universally slick, and her Senate testimony was so extensively peppered with attention-grabbing quotes seemingly custom-made for repetition in headlines and news reports. At the very least, her involvement with Zaid casts even more doubt on how genuine she is.

Despite his organization’s name and stated aims, Zaid has a history of maligning individuals who have actually spoken out in the public interest, including Julian Assange, Edward Snowden and Reality Winner.

What’s more, he’s been accused in open court by an FBI agent of specifically approaching the CIA and informing it his client Jeffrey Sterling, an Agency operative, had “voiced his concerns about an operation that was nuclear in nature, and he threatened to go to the media.” Sterling was subsequently sentenced to three-and-a-half years in prison for leaking that very information to a journalist.

It can only be considered a shocking indictment of the Western media that the revelation of Omidyar’s secret support for Haugen has not prompted a single mainstream journalist to question whether she is ultimately serving a wider, darker agenda, and what that agenda might be. After all, her public intervention surely represents an “inflection point”, Omidyar’s support of which “could catalyse significant change in an accelerated timeframe.”