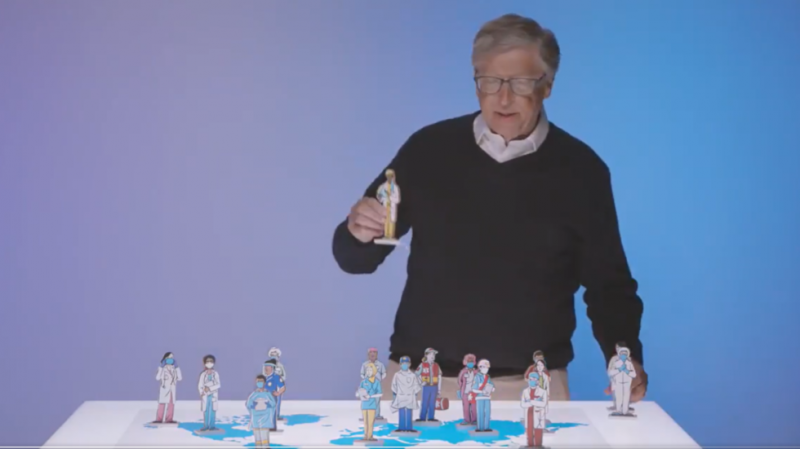 The Microsoft co-founder, who ranks as the world’s third-richest person, took to Twitter Monday to make his pitch for a new system that he said would help prevent future pandemics. This would include “mega testing diagnostic platforms” that could test 20 percent of the population every week, Gates said in a video promoting his plans. He added that future treatments, such as monoclonal antibodies, and vaccines will be developed far faster in response to future disease outbreaks.

Gates and his wife, Melinda, detailed the plan in their annual letter, which was released last Wednesday. But the Twitter video perhaps brought the implications home for observers in a more powerful way. It shows Gates moving around small figurines like chess pieces on a world map.

The figures depict humans of various races, and Gates positions them “to spot disease outbreaks, as soon as they happen, anywhere in the world.” If the so-called “global alert system” identifies a new infectious pathogen, teams of first responders, like “pandemic firefighters,” will rush to the location to contain the outbreak, Gates said, using toy planes, helicopters and figurines in protective yellow suits to illustrate his point.

“Stopping the next pandemic will require a big investment, but I think of this as the best insurance policy the world could buy,” Gates said.

The pitch was met with skepticism and fear on social media, where observers pointed out that such entities as the CDC and the World Health Organization are already charged with monitoring disease outbreaks and suggested that Gates has nefarious motives.

“Bill Gates is telegraphing globalism, setting the stage for more pandemics, advocating for an army of responders and clearly wants the entire population screened every six weeks,” one Twitter user said. “This is clearly a plan for world domination, which is evil.”

It didn’t help that Gates blocked comments on his Twitter page, except from people he follows. “So confident is Bill of preventing bulls**t pandemics, he turns his replies off,” commenter Andy Bird said. “Propaganda.”

A self-described libertarian conservative asked, “Is Bill Gates planning many more pandemics?” Another observer cited the so-called Event 201, a global pandemic exercise that Gates co-hosted with the World Economic Forum in October 2019, saying, “The last times Bill Gates had anything to do with a pandemic, that exact pandemic happened less than two months later. Something big is going to happen soon.”

Gates said last week that he had been targeted with a flood of “evil conspiracy theories” during the Covid-19 pandemic. He suggested that social media platforms may need to help censor such attacks. Without saying who “we” was, he asked, “How should we have minimized this, either working with the social media companies or explaining what we were up to in a better way?”