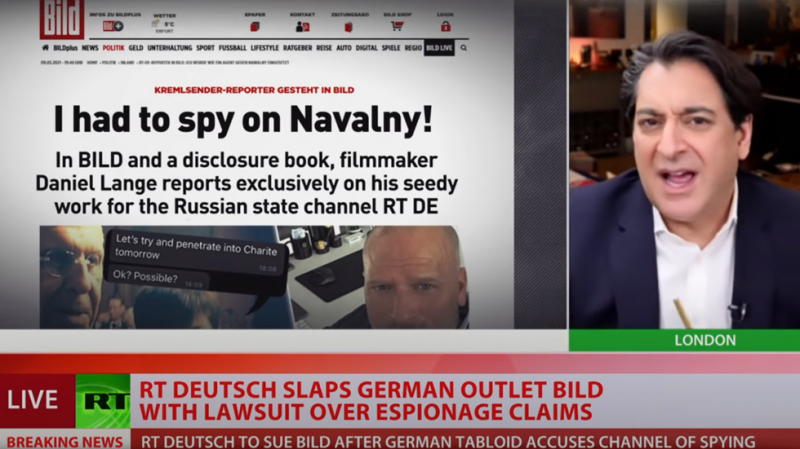 A story published in Bild on Tuesday alleged that RT’s German-language wing dispatched two of its reporters to “spy” on Russian corruption campaigner Alexey Navalny as he convalesced at a hospital in Berlin from an ostensible poisoning. But Rattansi, host of RT’s ‘Going Underground,’ argued the report failed to uncover anything nefarious, instead showing reporters doing their job.

“Journalists are always talking with sources, always trying to get that scoop, to question more,” he said in an interview on Tuesday. “The difference with RT’s questioning more is it relates to geopolitical events and power battles that really do concern life or death on planet earth, not celebrities.”

For its sensational piece, the German tabloid relied on former RT DE employee Daniel Lange, who says he was asked to closely follow the Navalny story, and at one point to access the clinic treating him at the time, as Bild itself appears to have done in September. Though Lange acknowledged “I don’t know if it was espionage,” he nonetheless said he “felt like an agent in some way,” with Bild citing his comments and a number of Telegram messages he passed to the outlet as the main backing for its report.

Rattansi said it is notable that the accusations come from Bild, calling it the “most reprimanded magazine in German publishing” with a long history of questionable and salacious reporting. According to German Press Council data, the tabloid was slapped with at least 72 public reprimands from the media regulator between 2015 and 2020, accounting for nearly one-third of the total in that period, more than any other outlet in the country.

The ‘Going Underground’ host also questioned why “a tabloid magazine focused on celebrities” would suddenly take interest in a tale of espionage, suggesting the publication may be motivated by its “connections” to outside organizations, information that could eventually come to light in a court battle.

“We have to look at Bild and its connections with NATO links, and why this would suit the organizations linked to Bild. If these kind of things came out in court, I think it would be interesting to Bild readers,” he said, soon after RT DE’s editor-in-chief Dinara Toktosunova said the outlet was planning to take Bild to court.

If I was the editor of Bild, I would be very concerned about a law case. Because this magazine is notorious for breaching German press standards, and now it’s going to be in court accusing journalists… [of being] spies. This is very much in a kind of narrative of NATO nations.