Home / WORLD / Big Tech may silence Trump when he leaves office – but who will they use for their ‘two minutes hate’ without the Bad Orange Man?

Big Tech may silence Trump when he leaves office – but who will they use for their ‘two minutes hate’ without the Bad Orange Man? 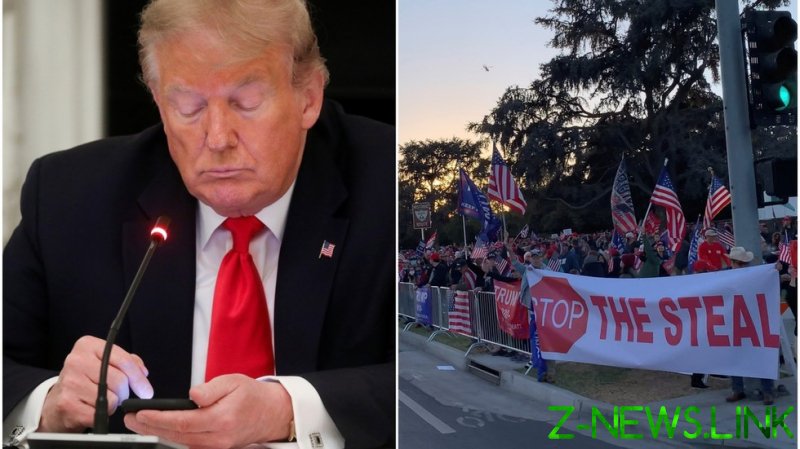 Trump has long escaped the worst of Twitter and Facebook’s heavy-handed censorship thanks to his presidential position, which allows him to play by looser rules than the choking thicket of edicts that has frustrated so many of his followers. But if he’s replaced in January by Biden, he’ll be just another user, subject to the same rules as the hoi polloi.

Many of his enemies can’t wait for that day, predicting Twitter and Facebook will pull the plug on his account as soon as they’re allowed. #DeactivateTrump was trending on Sunday night as users complained the president was “post[ing] false information and mislead[ing] the country with lies and false claims” that he was the one who really won the election, that voter fraud had been rampant in the swing states, and so on.

“Personally I don’t want to see his sh*t anymore,” one user sniffed, apparently forgetting the platform has both ‘mute’ and ‘block’ functions, while others used the argument that “any other person would have been banned by now.”

Yet their glee omits that many of the strictest regulations rolled out in recent months across Big Tech’s major platforms were deployed precisely because of Trump and his supporters, with an eye to suppressing their influence in the coming election. Horrified by 2016’s outcome, Facebook, Twitter, and Google (as well as its YouTube subsidiary) tied themselves in knots to prevent a repeat performance – and appear, at least so far, to have achieved their goal. With their mission accomplished, removing Trump serves no clear purpose other than inflaming his supporters – many of whom have already either been kicked off the major platforms or left in disgust. It could trigger a mass exodus – or worse, a revolt.

Deplatforming Trump could easily be the last straw for many conservative social media users sick of having their own posts and those of their ideological comrades censored. Competing apps like Parler and Gab have seen their subscriber numbers explode in recent weeks, and some influential MAGA types have made it clear that the president is their only reason for putting up with the increasingly onerous censorship and thought-policing.

The establishment is aware of this problem. Over the weekend, a pearl-clutching CNN segment deemed conservatives’ mass departure to right-wing-friendly “echo chambers” like Parler and Gab “a threat to democracy.”

Correspondent Pamela Brown fretted that users were “getting fed a diet of lies” – a hilarious complaint from an outlet that has become famous for the lies it feeds its own viewers. Last week, unreconstructed Russiagater Dave Troy even tried to claim Parler – which has topped the charts for most-downloaded social media app for weeks – was actually a Russian influence operation, supporting his allegations with such ironclad proof as…one of the founders is married to a Russian woman.

Such smears are part of a wider pattern to suppress alternatives to Big Tech, which have nevertheless flourished. Gab, another Twitter alternative, has thrived despite being deplatformed from the Google and Apple app stores years ago amid questionable allegations it fostered extremism, while YouTube competitor Bitchute has blossomed despite its links being banned from Reddit and heavily censored on Twitter. MeWe, an “anti-Facebook” that claims to neither censor nor use targeted advertising, has also attracted unprecedented numbers of new users, reaching #2 on the app charts. The smears aren’t working – and they may be driving even more users who’d otherwise never have heard of the platforms to join, a phenomenon known as the Streisand Effect.

Big Tech has more reasons to keep Trump around, however. Without him, many of the policies passed in recent months become at best redundant. Already enforced in a lopsided fashion (Biden is allowed to claim victory, but Trump is not), they will completely lose their meaning if their target – the Bad Orange Man – is completely banned. Platforms’ enforcement against left-leaning “wrongthinkers” – long ignored as commenters focused on the “Big Tech hates conservatives” narrative – will be exposed for all to see, and if the anti-establishment Left and Right start comparing notes, the ruling class is in deep trouble.

As the increasingly-nonfictional totalitarian system of Orwell’s 1984 realized, it’s much easier to keep citizens in line when there’s an enemy to vent their frustrations on. Trump’s tweets have thus far served as the equivalent to the Orwellian “Two Minutes’ Hate,” allowing liberals to hurl their anger at an easy target while the forces really responsible for the country’s problems are free to operate behind the scenes. Take that away and the population might start waking up.