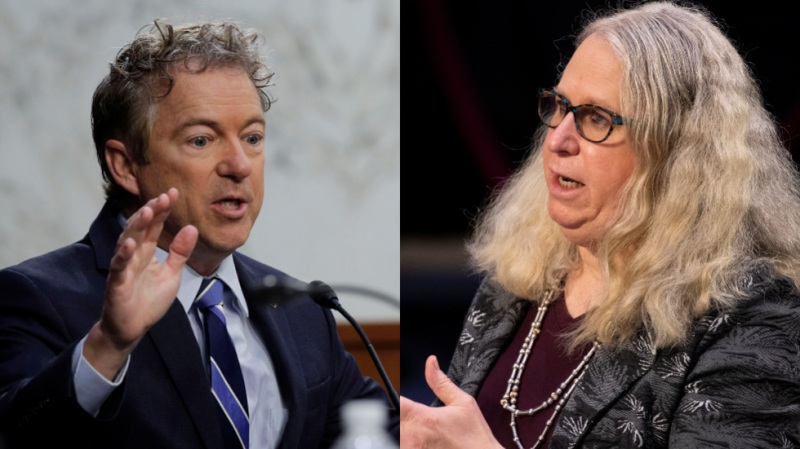 Dr. Richard Levine had a long and successful career as a pediatrician before undergoing gender reassignment surgery in 2011 and taking the name Rachel. Since then, Rachel Levine has transitioned to politics, becoming Pennsylvania’s health secretary in 2017, before being tapped by President Biden earlier this month to become the next US Assistant Secretary for Health, as well as the highest-ranked transgender person in the federal government.

Biden has repeatedly boasted about his diverse cabinet, which he said “looks like America.” However, Levine’s nomination hasn’t been universally hailed. During her confirmation hearing on Thursday, Kentucky Senator Rand Paul (R) took her to task over her support for sex changes for transgender children.

After comparing transgender surgery to “genital mutilation,” Paul asked Levine whether she believes “that minors are capable of making such a life-changing decision as changing one’s sex?”

Levine dodged, telling Paul that “transgender medicine is a very complex and nuanced field,” and that she’d be happy to talk the issue through with the Kentucky Republican – after being confirmed to the job.

Paul pressed on. “Do you support the government intervening to override the parents’ consent to give a child puberty blockers, cross-sex hormones, and/or amputation of breasts and genitalia?” he asked, to which Levine gave the same response.

Levine has not publicly supported surgery for every child who believes that they are transgender. However, she has made social media posts supporting the provision of puberty blocking drugs to children, and during a 2017 speech at Franklin & Marshall College advocated cross-gender hormone treatment for 14-year-olds, and in some cases an “accelerated” path to surgery.

Citing statistics from the UK which showed three-year-olds receiving treatment in transgender clinics, Paul said “we should be outraged that someone is talking to a three-year-old about changing their sex!”

Whatever Levine’s opinion, American children may soon find it easier to change their gender. The House of Representatives was due to vote later on Thursday to pass the Equality Act, a far-ranging far-reaching piece of legislation that, among other provisions, would make “gender identity” a protected class under Title IX of the 1964 Civil Rights Act. As such, doctors would be compelled by law to perform such procedures, and parents could be prosecuted for preventing their children from transitioning. The bill will likely pass the house, but could face significant opposition in the evenly-divided Senate, where it needs a two-thirds majority to reach Biden’s desk.

Online, Rand Paul was met with an avalanche of condemnation. Accused of spreading “transphobic discrimination,” Paul, who is also a qualified physician, was dragged across the coals by liberals. Later in the hearing, Democratic Sen. Patty Murray of Washington state accused Paul of making “harmful misrepresentations” about transgender children.

Levine has also been in the firing line before, albeit not for transgender issues. As Pennsylvania’s health secretary, she issued an order last March requiring nursing homes to accept patients with Covid-19, but pulled her own mother out of a care home shortly afterwards. At the time, 70 percent of the state’s deaths with Covid-19 had occurred in care homes.