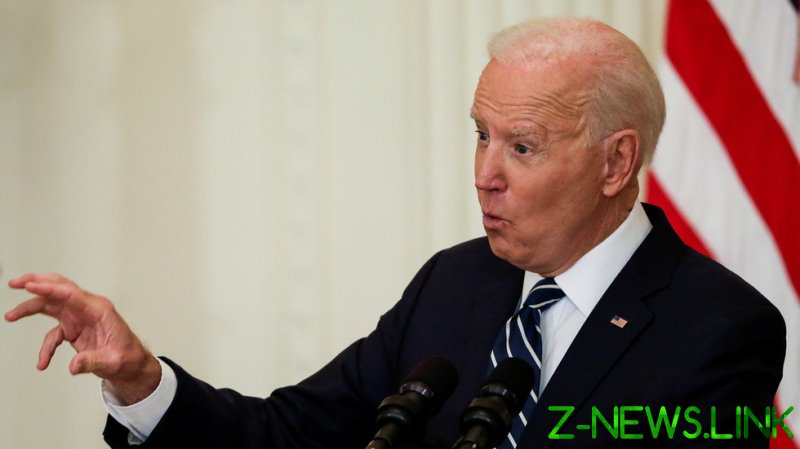 Biden was almost 15 minutes late to his own very first “formal press conference” since taking office. He dodged questions, spouted platitudes and talking points, went off on tangents at times while getting angry and uttering what may have sounded like threats at others.

No doubt some of that could be down to his advanced age, but let’s assume for lack of another explanation that the words were indeed his and that he truly meant what he said. And, oh brother, is the US in trouble.

In Thursday’s presser, Biden actually repeated – twice – the previous day’s talking points, down to the description of someone “sitting at their kitchen table” in Central America, about why tens of thousands of migrants are coming to the US. He knows why, better than they do. Never mind that the tide began the day he was announced winner of the 2020 election, or the migrants who literally told reporters they decided to come because Biden got elected, or wear T-shirts with his campaign logo and the words “please let us in.”

Nope, you’re supposed to ignore your lying eyes and believe Uncle Joe, because his great-grandfather had no choice but to leave Ireland in a “coffin ship.” What are you, a lying dog-faced pony soldier? Come on, man!

This sort of emotionally manipulative imagery is nothing new for Biden; he did it in the pandemic speech earlier this month, as well as his inaugural and his convention address. The press keeps falling for it, though, every single time.

No wonder Dana Carvey was catching flak this week; his impersonation of Biden – not just his voice, but his mannerism and verbal tics – was spot on.

When they weren’t asking about the migrants surging into the US because Uncle Joe is just so gosh darn “moral [and] decent” – actual quote – the press was asking why won’t he commit to eliminating the Senate filibuster, basically the only thing standing in the way of Democrats finishing the process of turning the American republic into Our Democracy.

Biden was a bit dodgier here, since he supported the filibuster in the Senate – and the Democrats used it throughout the Trump years to block anything he wanted to pass. So he wouldn’t commit to anything, even while he agreed with a CNN reporter that the filibuster was racist and promised to “keep an open mind” about “things that are elemental to our democracy.” He also wants to “change the paradigm” of American politics. What does that mean? You’ll find out when he chooses to tell you.

He did, however, start yelling about how “DESPICABLE” and “un-American” and “sick” the Republican states’ voter integrity laws were.

“This makes Jim Crow look like Jim Eagle,” he said at one point.

For all his supposed joking about joining the Senate “120 years ago,” it appears Biden doesn’t know “Jim Crow” was the racist stereotype of an African-American that the segregation laws were named after, and had nothing to do with actual crows – so his bird-size metaphor doesn’t really work.

In any case, Biden pointed to polls – you know, the same polls that were wrong in 2016 and again in 2020 – to claim that “Republican voters approve of what I’m doing” even if zero congressional Republicans do. Reality is what the media-manufactured consensus says it is.

“I have no idea if there will even be a Republican party. Do you?” he shot back when asked about the 2024 election. Funny, or chilling? You decide.

As the conference wore on, Biden started rambling more and more. On Afghanistan, he said the decision to miss the May 1 withdrawal deadline was “tactical” (the actual talking point is “logistical”), then said “if we leave,” only to correct himself to “we will leave, the question is when.”

On China, he said the US doesn’t seek confrontation but competition – before going off on a tangent about a civilizational clash of “autocracies” and “democracies” that will shape the world for years to come. When asked about gun control, he gave a lengthy, rambling answer about… infrastructure.

It was at that point I had a sudden flash of recognition: I’m watching Taravangian, on one of his bad days.

The character from the prolific fantasy author Brandon Sanderson’s door-stopper saga ‘The Stormlight Archive’ had made a bargain with a supernatural power – to save humanity, he says. As a result, he wakes up feeling different every morning: either a genius or a barely functioning idiot, with his sense of compassion inversely proportional to his intelligence.

As with every analogy, this one isn’t perfect. But after Thursday, President Kamala Harris looks like something that will happen sooner, rather than later.