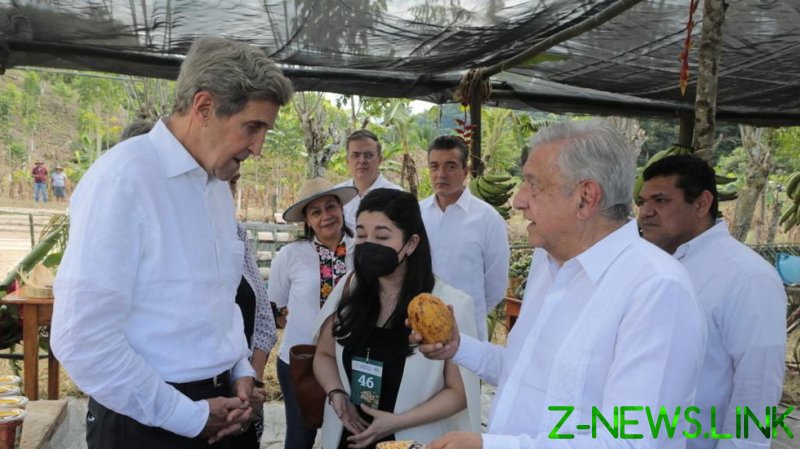 Kerry, US President Joe Biden’s special climate envoy, has argued that Mexico would profit if Biden accomplishes his far-reaching goal to phase out gasoline-powered vehicles.

“Mexico’s industrial base, already deeply integrated with the rest of North America, absolutely stands to benefit from the energy transition,” Kerry claimed on Monday after meeting with Mexico’s President Andres Manuel Lopez Obrador.

“There are going to be a lot of good-paying jobs here in Mexico because of the connection already of the automobile industry and our two countries,” he went on to say.

While pushing Biden’s climate agenda, Kerry has courted widespread controversy as his personal behavior comes in stark contrast to his climate rhetoric, such as taking a private jet to receive an environmental award, while his own family’s fuel-guzzling private jet has been spotted traversing the skies multiple times a week, according to Flight Aware data. In January, Kerry came under fire after suggesting that energy workers that would be laid off by Biden’s environmental policies could find a living making “solar panels.”

Since he came to power, Biden has led a crusade against gas-powered cars, tightening pollution standards and demanding that electric cars make up at least half of all new US vehicle sales by 2030. His $174 billion proposal will see some $100 billion spent to encourage Americans to invest in electric vehicles, including through offering tax credits and creating a network of charging stations across the country. Despite its far-reaching nature, however, some climate activists have decried Biden’s plan to transition to “green energy” as underwhelming at best.

In contrast, the United Autoworkers (UAW), which represents some 390,000 active industry workers in the US and Canada, has backed the plan, noting in a statement earlier this month that “we need these jobs of the future to be as good or better than the jobs they replace.”

A recent report by the Economic Policy Institute found, however, that the US auto industry is on course to lose some 75,000 jobs by 2030 if the impact from the transition is not offset by government subsidies.

“We find that if this shift to BEVs [battery electric vehicles] is done without any policy efforts to shore up US leadership in BEV production or to enhance job quality and equitable access to good jobs, then this sector will see employment decline and job quality continue a downward march,” the report released in September states.

On the contrary, if “smart policy measures” are implemented to boost production of electric vehicle components in the US and domestic sales, then the sector can add as many as 150,000 jobs by the end of the decade, according to the report.