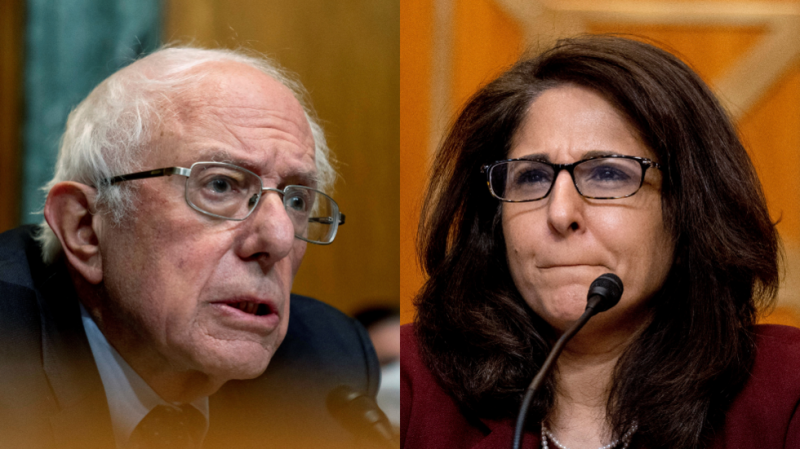 Tanden sat before the Senate Budget Committee on Wednesday for her second confirmation hearing, after Tuesday’s session with the Homeland Security Committee. This time, Sen. Bernie Sanders (I-Vermont) held the gavel, and questioned Tanden on her history of derogatory statements about him and his progressive supporters.

“Your attacks were not just made against Republicans,” Sanders told Tanden. “They were vicious attacks made against progressives, people who I have worked with, me personally,” he added, before asking Tanden to “reflect” on her statements.

A political consultant and strategist for both Barack Obama and Hillary Clinton, Tanden has been a dogged defender of the Democratic Party’s pro-corporate centrist establishment against threats from both the left and the right. In addition to calling Sanders “crazy” and allegedly punching his 2020 campaign manager several years earlier, ThinkProgress, a news site set up by her Center for American Progress foundation, ran articles criticizing Sanders on everything from his appearance to his policies.

Tanden was equally scornful to Republicans (calling them “vampires”), some of whom spoke up for Sanders during Wednesday’s hearing.

“Her scorn was not limited to Republicans,” said Republican Sen. Lindsey Graham of South Carolina, before reading one of Tanden’s past tweets aloud: “Russia did a lot more to help Bernie than the DNC’s random internal e-mails did to help Hillary.”

Senator John Kennedy (R-Louisiana) was more lurid with his prose. “You called Sen. Sanders everything but an ignorant slut,” he said, a reference to a classic ‘Saturday Night Live’ sketch by Dan Akroyd.

Tanden, who has deleted more than 1,000 tweets since November, apologized to Sanders, saying “my language and my expressions on social media caused hurt to people, and I feel badly about that.” The combative consultant also promised to support raising the minimum wage to $15, making public college tuition free for low-income students, and providing free universal preschool education, all key components in Sanders’ progressive agenda.

However, there were more substantive criticisms of Tanden than her tone on Twitter, some of which were brought up on Wednesday, and others that were left unsaid.

Tanden’s Center for American Progress has taken donations Wall Street, foreign governments and Silicon Valley, including $665,000 from Facebook CEO Mark Zuckerberg’s personal foundation. Missouri Republican Josh Hawley roasted her on these donations during Tuesday’s Homeland Security hearing, and Sanders took up where Hawley left off on Wednesday, asking for an assurance that these donations “will not influence your decision making.”

Tanden maintained they would not.

She was not questioned, however, on a bizarre 2011 email released by WikiLeaks, in which she suggested that the US could avoid cuts to social welfare programs by forcing Libya to pay for the disastrous bombing campaign that helped topple Muammar Gaddafi’s government.

“We have a giant deficit, they have a lot of oil,” she wrote, explaining that “if we want to continue to engage in the world, gestures like having oil-rich countries partially pay us back doesn’t seem crazy to me.”

Libya, of course, would go on to become a failed state fought over by Islamists and noted for the emergence of open slave markets after the toppling of Gaddafi. Far from being in a position to pay back the US after its collapse, the country is now barely out of a civil war between two rival governments and their armies.

Following Wednesday’s hearing, both the Budget and Homeland Security committees will vote on Tanden’s nomination. Should she be successful, a simple majority vote on the Senate floor will see her installed as the new director of the Office of Management and Budget. Though the Democrats have de-facto control of the Senate, her confirmation will likely be the most contentious of all of Biden’s nominees thus far, with Republican Senator John Cornyn (R-Texas) describing her in November as “radioactive.”