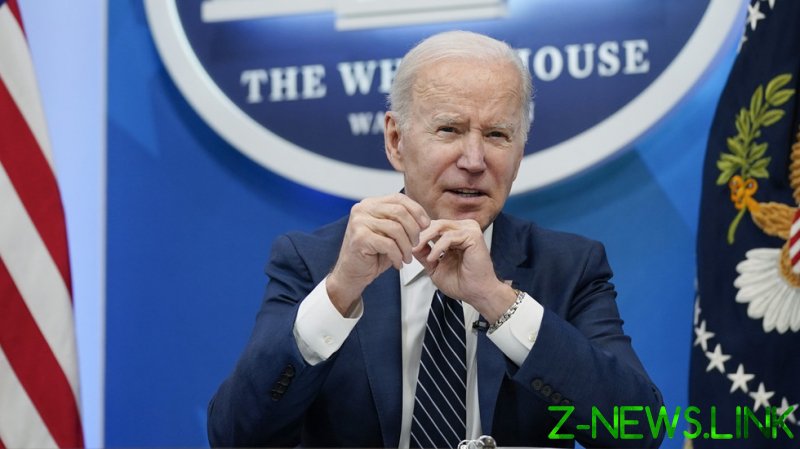 Americans have grown even more disenchanted with Joe Biden’s performance as president amid the conflict in Ukraine, and few observers have confidence in his ability to deal with the crisis, a new NBC News poll has revealed.

Just 40% of adults approve of Biden’s job performance, down from 43% in January, according to the poll, which was released on Sunday. Only 16% of respondents said they “strongly approve” of the president, compared with 42% who “strongly disapprove.”

The March survey marks a new all-time low in NBC’s polling about Biden. His ratings were around 60% shortly after he took office in January 2021.

The US president apparently hasn’t won over many voters so far with his handling of the crisis in Ukraine. Just 12% of Americans have “a great deal” of confidence in his ability to manage the situation, the poll showed, compared with 44% who have “very little” confidence. A further 27% said they had “just some” confidence, while 16% reported “quite a bit” of confidence.

Around 36% of respondents said they’re concerned that the US will get too involved in the conflict, while 21% said their government won’t get as involved as it should. A startling 57% of Americans believe the country is already at war with Russia or will be at war with Russia within the next year.

Biden has apparently failed in his efforts to convince voters that Russian President Vladimir Putin is to blame for the highest US inflation rate in 40 years. The poll found that 38% of Americans believe Biden and his policies are most to blame for surging prices. Other perceived culprits include the Covid-19 pandemic (28%) and corporations (23%). Just 6% said the Russian attack on Ukraine was the biggest cause of the inflation crisis.

Just 33% of Americans approve of how Biden is handling the economy, down from 47% last August, the poll showed. Only 6% said their incomes are rising faster than the cost of living, versus 62% who said their families are falling behind economically. About 71% see the country as being on the “wrong track,” while 22% said it’s “headed in the right direction” – unchanged from January’s result.

The NBC poll showed that 83% of Americans are concerned that the Russia-Ukraine conflict will make inflation even worse, including 56% who are “very concerned.” Other concerns include fears that the conflict will involve nuclear weapons (82%) and that Biden’s administration will send US troops to fight in Ukraine (74%).