Home / WORLD / Biden’s approval rating continues to fall amid Afghanistan chaos, which even Democrats are calling a ‘catastrophe’

Biden’s approval rating continues to fall amid Afghanistan chaos, which even Democrats are calling a ‘catastrophe’ 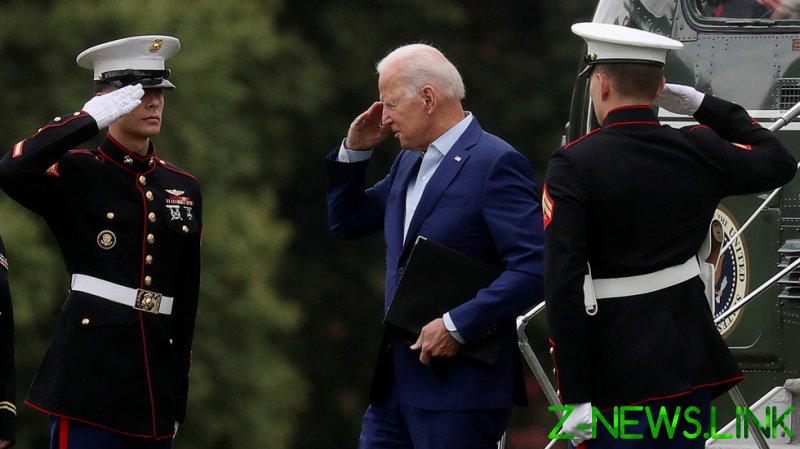 Fewer than half of Americans surveyed approve of the president’s performance, according to a poll conducted by Rasmussen, the results of which were published on Tuesday, and 54% disapprove. Among that majority, 45% “strongly disapprove”. Only 27% expressed “strong” approval of the Democrat.

Tracking from Rasmussen and other surveys shows Biden has been facing declining public approval ratings for weeks. Criticism of his performance in the White House has meanwhile reached a new level, with both liberal and conservative critics labeling the ongoing Afghanistan withdrawal a failure.

Rep. Jim Langevin (D-Rhode Island), a senior member of the House Armed Services Committee, broke with his party’s leader in an article in Foreign Policy magazine on Tuesday, in which he called the handling of the withdrawal a “catastrophe.”

“At minimum, the Biden administration owed our Afghan allies of 20 years a real plan. They also owed it to our military service members and their families, particularly the men and women in uniform and their families who gave the ultimate sacrifice,” the Democrat wrote.

The Biden administration has faced heavy criticism in recent days, as the Taliban reclaimed significant territory, including the capital Kabul as soon as US and allied forces pulled out. Many have also pointed to the apparent lack of a plan for getting out of the country the thousands of Afghan citizens who assisted the US military.

Langevin is far from the only Democrat pointing to Biden’s flawed exit ‘strategy.’ Rep. Seth Moulton (D-Massachusetts), a military veteran who served in Iraq, described the situation as a “disaster.”

“The time to debate whether we stay in Afghanistan has passed, but there is still time to debate how we manage our retreat,” he said during a press conference in Salem, Massachusetts. He added that he had been advocating with the White House for months to expedite the withdrawal of Afghan allies, but the requests had fallen on deaf ears.

Moulton poured scorn on Biden’s claim that some Afghan allies had not wanted to leave earlier, causing some of the current chaos, calling it “utter BS.”

“Don’t tell me they don’t want to leave when they’re literally clinging to airplanes to try to get out of this country. That was the single part of the president’s speech that I not only disagreed with, but I thought was just utter BS,” he said.

Evacuation flights have become more difficult to find as conditions on the ground intensify, and after the Taliban took control of Kabul and the capital’s airport.

The situation in Afghanistan has also prompted conservatives more supportive of foreign war efforts to not only blast Biden, but former President Donald Trump, who broke with many Republicans when he made clear during his 2016 election run that he wanted military efforts in the Middle East to end.

Former National Security Advisor John Bolton was invited on to CNN to offer his perspective on the situation, and, predictably, he argued that a continued military presence was necessary, dubbing Biden and Trump “Tweedledee and Tweedledum.”

The Biden administration is facing further criticism for seemingly not having a plan to get even American citizens out of Afghanistan. Pentagon Press Secretary John Kirby told the press on Tuesday that there could be between 5,000 and 10,000 American citizens in or near Kabul who were in need of evacuation.

In a message reportedly sent to citizens making a request for evacuation through the State Department, Americans are being told to make their way to the capital’s Hamid Karzai International Airport, where they have been advised there will be a number of flights leaving soon. The US government qualifies in the message that it cannot guarantee their safety en route to the airport, however.