Home / WORLD / Biden wore a mask during VIRTUAL climate summit to ‘send a message’ to the world, White House says

Biden wore a mask during VIRTUAL climate summit to ‘send a message’ to the world, White House says 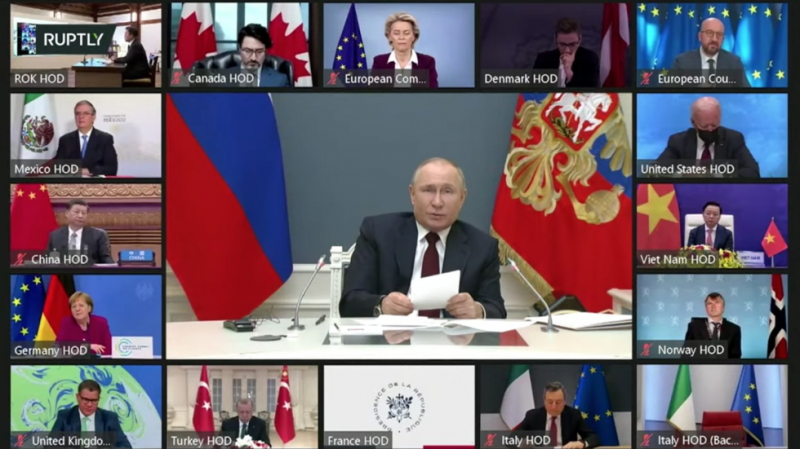 A viral photograph – a screenshot taken from a Ruptly feed – appeared to show Biden was the only world leader in the meeting on Thursday wearing a mask. Psaki defended the move in her Monday press briefing, offering an odd explanation.

Asked by a reporter why Biden was “the only world leader at the climate summit Zoom who was wearing a mask,” Psaki responded: “Because he is sending a message to the world that he is putting in place precautions, and continuing to do that as the leader of the United States.”

Psaki also justified Biden’s decision by claiming there were others in the room with him during the virtual meeting.

Psaki did not clarify what “message” the leaders who did not wear masks were sending to the world.

After it gained traction online, several media organizations jumped to ‘fact check’ the image, dramatically revealing that Biden was not, in fact, the only participant to wear a mask, and stating the obvious fact that the image was merely one screenshot grabbed over the course of a two-day summit.

Fact-check articles from USA Today, Snopes, and PolitiFact earnestly pointed out that only a fraction – 17 out of 40 – of the leaders attending the virtual summit could be seen in the image. They noted that other participants off-camera at that moment were also wearing masks, including UK Prime Minister Boris Johnson, Japanese Prime Minister Yoshihide Suga, and Argentinian President Alberto Fernandez.

Most leaders, however, chose to forgo the mask for the Zoom get-together.